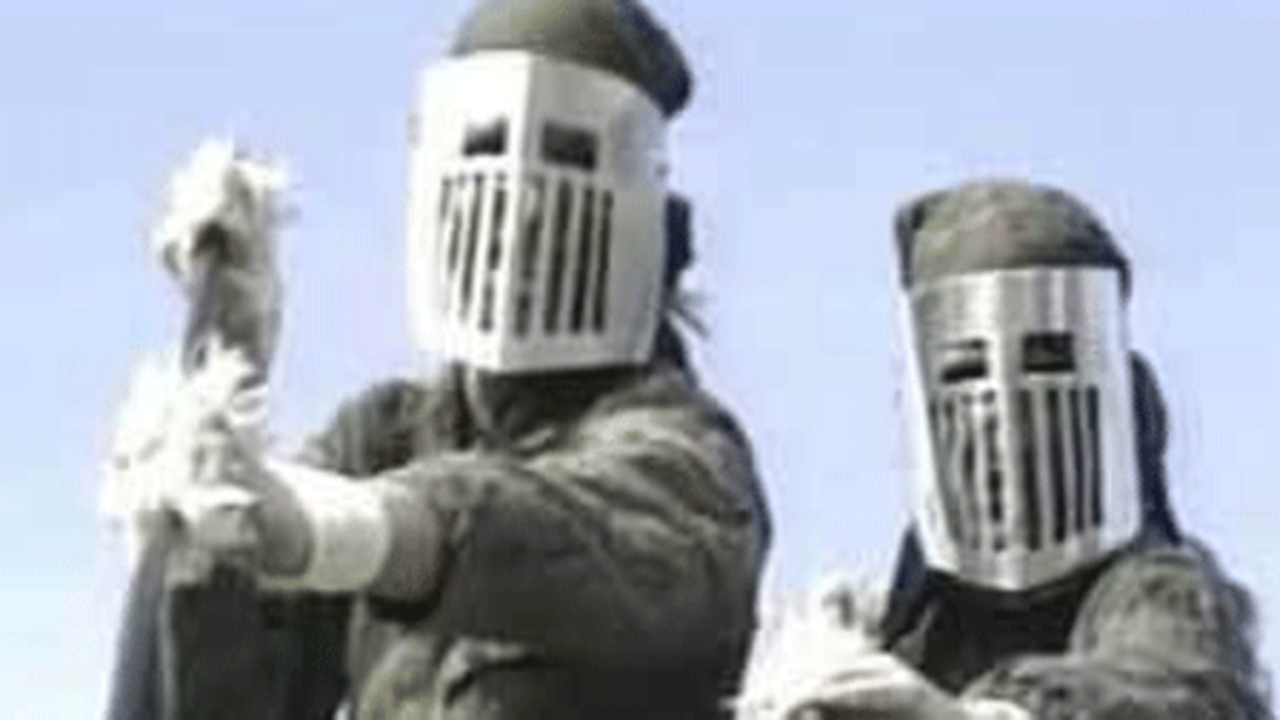 A kind of tranquility came over me as I sat watching Zombie Doom. It came around ten minutes into the film, or video, I should say. I knew, without a doubt, that I was watching the worst movie I had ever seen, or would ever see. Most people have seen terrible movies, but how many have seen ones that gave them such a certain feeling of closure? I can check it off of my life’s to-do list. Next is skydiving.

What about the movie? There is little to say, except that it was made without pretense, ambition, art, or talent. There was something refreshing about its directness: it was about gore, unencumbered by humor or pathos. The plot is simple. Three men land their boat on an island. They are kidnapped by men wearing tin facemasks and carrying shields made from garbage can lids. They are taken to a camp filled with extras who didn’t make the cut at the Army of Darkness casting call. These people worship “The Meister” (Marc Trinkhaus), whose son Karl the Butcher (director Andreas Schnaas) runs the place. Karl likes to pull people apart with hooks. Many people die, including these three men, one of whom is quickly murdered while the other two are sent running on the island, to be hunted down and killed. They are accompanied by an Asian man (Xiu-Yong Lin) who has rebelled against the Meister. There are some zombies lurching around, created by the camp’s resident mad doctor. Sigh.

Deaths abound, and they are somewhat horrifying, except that they are all clearly prosthetic parts spurting fake blood. I could go on describing the gore, but since it is this movie’s only reason for being, I will not spoil that dubious pleasure for people who actually want to see this movie. Even by the admittedly low standards of the zombie ghetto of the horror film genre, this is atrocious.

I can’t figure out what the worst thing about it is. Is it the slack pace, which makes the movie’s brief 75 minutes feel like an eternity? Perhaps it was the complete lack of filmmaking talent. Many shots were so poorly framed that speakers’ heads were offscreen, and please don’t try to convince me that it was done intentionally. It was also shot in the ugliest digital video imaginable, with a few scenes inexplicably shot in grainy 8 mm and blown up. Perhaps it was the fact that it was done so cheaply that all of the sound was added in the recording studio after shooting was done: it’s pretty obvious that the characters are not speaking English (the film is German), but there are absolutely no background sounds that don’t have that hollow ringing sound of a bad microphone in a shoddy recording studio. Perhaps it’s the fact that even the most basic tenets of story and character were dispensed with. Andreas Schnaas is a twisted man, and he’s a terrible filmmaker. Even the overlong fight scenes are completely without life. The characters, including two random ninja warriors who apparently live on the island, look like participants in a 1950s military training video. They move awkwardly, then stand still to be chopped in half or kicked. And the dialog… one character says “The world’s full of puke and shit and now a horde of tin-masked assholes puked in our faces filled with shit.” That’s as poetic as it gets.

This film was supposed to be the final film in a trilogy. Its original title was Violent Shit 3: Infantry of Doom. There are at least two more movies out there by the same team of morons. But wait: Andreas Schnaas is making another one, called (you guessed it) Violent Shit 4. That makes me sad. I want my 75 minutes back.