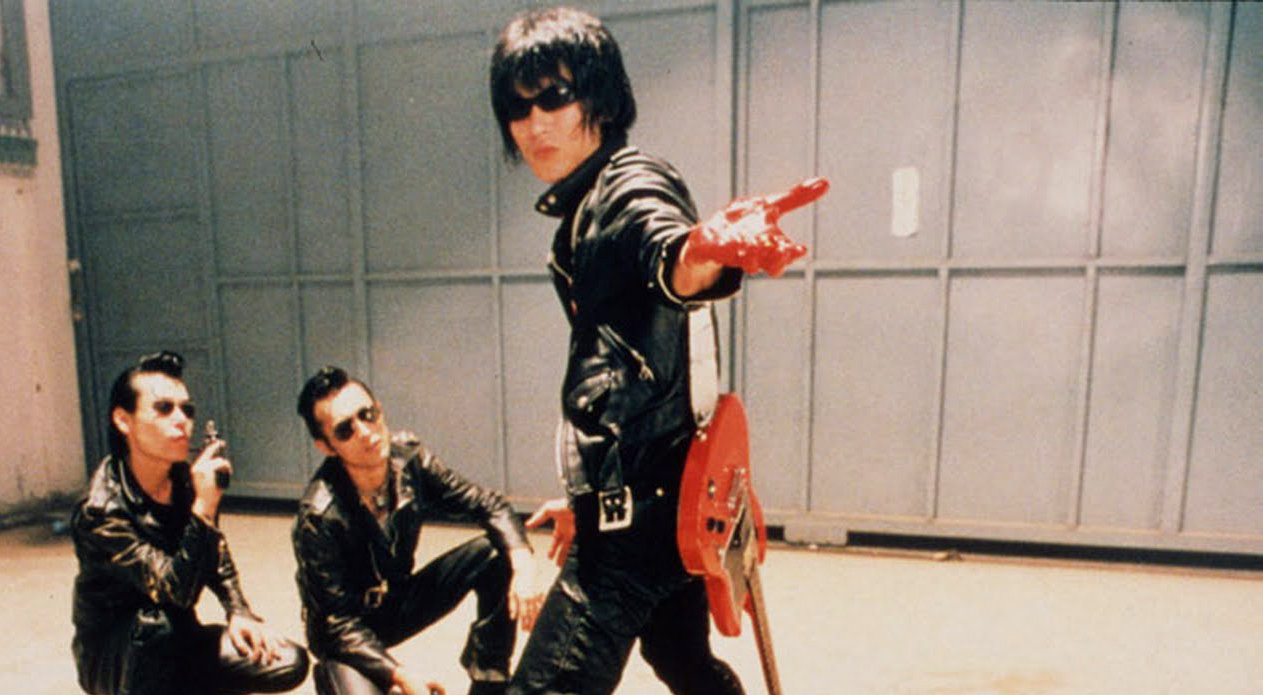 To paraphrase a character in this frenzied and fun Japanese zombie movie, love and rock and roll know no boundaries of language, nationality, gender, or state of un-death. That character is Guitar Wolf, the superhero/rock star who, along with Bass Wolf and Drum Wolf, fight the forces of corruption and alien zombies with such unflappable cool and poise that it seems disrespectful to laugh at them. Laugh you will, though, because in addition to being a chaotic rock and roll zombie movie, it is also riotously funny and absurd. More a series of vignettes featuring the same characters than a narrative film, it strongly suggests an episodic series of music videos featuring the band and their number one fan, Ace. And the shambling dead.

The humor starts early: over the opening credits, badly animated flying saucers zoom toward Earth. A radio DJ advises people not to use these “meteorites” as well covers or centerpieces. We meet Ace (Masashi Endo), a transplant from a Japanese biker movie. He carefully gels and combs his hair into a 1950s ducktail. Then he combs it some more. There is so much careful hair-combing in this film that the DVD includes a drinking game featuring hair-combing as a signal to drink. Then he sets off for the club to see his favorite band, Guitar Wolf. (This is a real band. To give you a clue as to their main influences, one of their albums is called “Kung Fu Ramone.”) He stumbles in on a shootout between Guitar Wolf, who are heavily armed and cooler than James Dean, and their corrupt manager, The Captain (Makoto Inamiya), who tells them that rock and roll is dead. Ace barges in, proclaims that rock and roll will never die, and is knocked senseless by one of the Captain’s bodyguards for his trouble. The guns start blazing, the Captain loses some fingers, and Guitar Wolf accepts Ace as his blood brother. He gives the neophyte a whistle, which he should blow if ever in trouble. That turns out to be most of the rest of the movie.

Ace sets off on his own and encounters a beautiful young woman, Tobio (Kwancharu Shitichai), when he unwittingly foils a robbery at a gas station. He leaves the young woman behind but quickly changes his mind. You see, the aforementioned flying saucers are turning people into zombies. They stumble around, Night of the Living Dead-style, and kill people. Ace rescues his new love from them and the two hole up in an abandoned school of some sort. They quickly fall in love as the marauding dead smash their way into the building, and Tobio turns out to have been hiding a major secret. Ace receives some advice from Guitar Wolf, who appears like Elvis did in True Romance, then he blows his whistle, sending his rock and roll blood brother on a quest to rescue him. Meanwhile, a gang of yakuza are on their way to a major arms purchase when they are devoured. The arms dealer, a beautiful woman whose name escaped me, learns about the zombies the hard way, when they lurch into her bathroom in an homage to Psycho. She fights her way out and drives off, encountering Guitar Wolf and a pair of bickering lovebirds at the gas station. The new zombie-fighting gang set off to retrieve the arms dealer’s arsenal and rescue Ace and Tobio, who have become separated. Meanwhile, the Captain is on the warpath, seeking revenge against Guitar Wolf. Now rock and roll, hair gel, and impressive firepower must work to save the day (in roughly that order of importance).

The film is silly, to be sure, but it’s done with such unbridled enthusiasm that it makes you want to go along unquestioningly. There are times when the narrative falls apart, when the acting is terrible, when the preposterous weight of the entire production threatens to collapse, but the filmmakers always escape disaster, with a great visual pun, an absurdist development, or sometimes just a great visual. They understand the power of striking a rock god guitarist pose, which never hurts. Just about everyone involved in the film is ridiculous in some way. Guitar Wolf play loud Ramones-style punk, and their acting chops consist mainly of posing, combing of hair, and screaming of rock and roll platitudes that, delivered with such conviction, never really sound silly. Well, they’re silly, but you know what I mean: it’s sincere. All they need is three chords and the truth, a comb, and lethal electric guitar picks that zap zombies dead (really). The most enjoyably perverse character is the Captain, the demented nance who never stops smiling and who wears the most awful shorts. The fact that he seems completely unstoppable only adds to the hilarity of every scene in which he appears.

This is a zombie movie, so there is gore, but it’s mostly computer generated, and unreal enough to not turn the stomach. The film’s low budget was used really well, so it never really looks cheap. It wears its influences on its sleeve, and a lot of the fun comes in identifying the source material. I assume that the Ramones’ film Rock ‘N’ Roll High School is a major influence, but since I haven’t seen it, I can’t say. The most obvious thing about it is that the filmmakers had a marvelous time filming it, and their enthusiasm is catching. This is definitely one of the most enjoyable horror films I’ve ever seen.