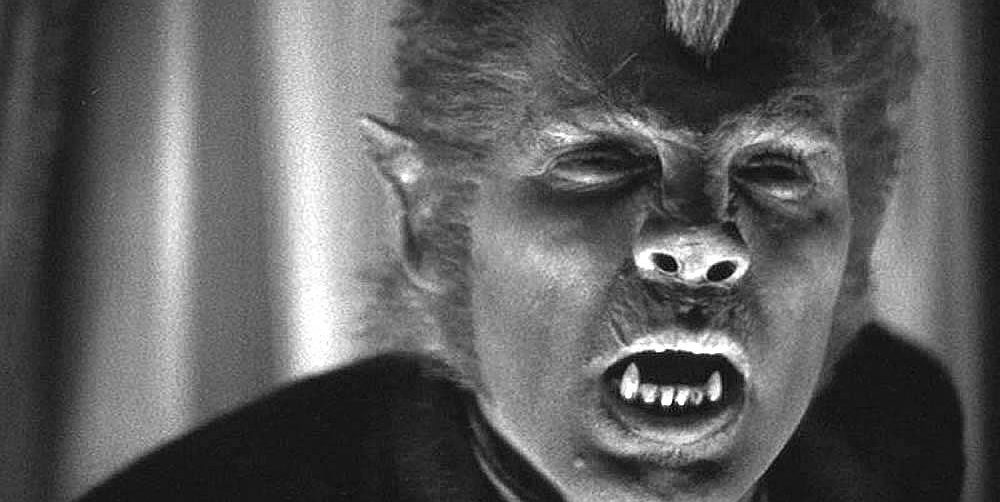 This mostly forgotten early entry in Universal’s classic horror cycle is the first werewolf talkie, and it’s valuable mostly from a historical standpoint. Henry Hull plays Dr. Glendon, a botanist traveling to Tibet in search for a rare flower that grows only under moonlight. He’s not much of a botanist, because he talks a lot about “the power of the moonlight,” which, being simply light reflected from the sun, is basically the same as sunlight, only weaker. But anyway. When he locates this rare flower, he is attacked by a hairy wolflike creature, but he survives and brings back a sample of the flower to London.

Back in London, Glendon is too busy with his experiments to be a good husband to his wife Lee (Valerie Hobson). Those experiments consist of his attempts to create a special ray that will replicate moonlight, in hopes that he can make this weird new plant bloom. (His lab is pretty advanced, including a monitor that allows him to see who is approaching the door.) At a dinner party he meets the mysterious Dr. Yogami (Warner Oland), who claims to have met him before, in Tibet. He’s interested in the strange flower, and it’s clear to us that he’s the werewolf that attacked Glendon, but it takes Glendon a while to get it. When a string of vicious unsolved murders springs up, each apparently committed by a wolflike creature, Glendon realizes what he has become, but it’s too late: the flower, which is the only way to stop an infected person from changing into a werewolf, is missing.

What keeps this film from being in the upper echelon of classic horror films, and what probably kept it from joining other films in having a string of sequels, is that it lacks a really magnetic or sympathetic monster. Frankenstein’s monster was sympathetic; Lyle Talbot in The Wolf Man was a nice guy, even if he was a whiner; Bela Lugosi was magnetic as Dracula. Here, we have Henry Hull as an essentially unlikeable leading man. He’s impatient, gruff, and funny looking; the monster he turns into lacks personality beyond its interesting hairline. The film attempts to redeem him in the final scenes, and he’s probably the only classic monster-movie creature to get a parting speech, but I found myself disliking him throughout.

There are other places to find your emotional attachment, but, save one, none are really compelling. Valerie Hobson, who plays essentially the same role as she played in Bride of Frankenstein the same year, is pretty and intelligent, and she gets to do some screaming toward the end of the film. Warner Oland, who played Charlie Chan in almost twenty films, comes across as simply a terrible actor as the mysterious Dr. Yogami. The ostensible romantic lead, Clark Williams, plays Mrs. Glendon’s childhood suitor, and they have about as much spark as grade-school kids passing “Do You Love Me?” notes at recess. But there is one really great character, who elevates every scene she’s in: Spring Byington as Aunt Ettie, an absentminded older woman with a tendency to overindulge in alcohol who has a surprising amount of spark (watch the scene where she seems to be attempting to seduce Dr. Yogami). I felt actual anxiety when it looked like she was going to be the werewolf’s next victim, which is a sign of how effective she is.

There are some nice touches throughout. I liked Glendon’s garden, which is full of bug-eating plants, which reminded me of Mrs. Venable’s greenhouse-of-horrors in Suddenly, Last Summer, and I especially liked Aunt Ettie’s fascination with the plants. Glendon’s transformations into a werewolf are well handled, including one really great one where he walks behind a pillar as a man and emerges from the other side, a split second later, as a wolf. Not very realistic, but stylish and creative. I liked how the monster had the forethought to put on its coat and hat before stalking the streets, so he looked like a simple crazy stalker instead of a werewolf. There’s a nice bit of unintentional foreshadowing to the “have sex and get killed” plots of 1980s horror films when the werewolf attacks an adulterous couple at a zoo. And the werewolf’s makeup, by legendary makeup man Jack Pierce, is far better than the wolf makeup in The Wolf Man. But the film is saddled with a slogging pace, especially in the half-hour before Glendon realizes what he’s become, and the combination of uninspiring leads and a somewhat half-hearted script make it tough going, even at a trim 75 minutes.