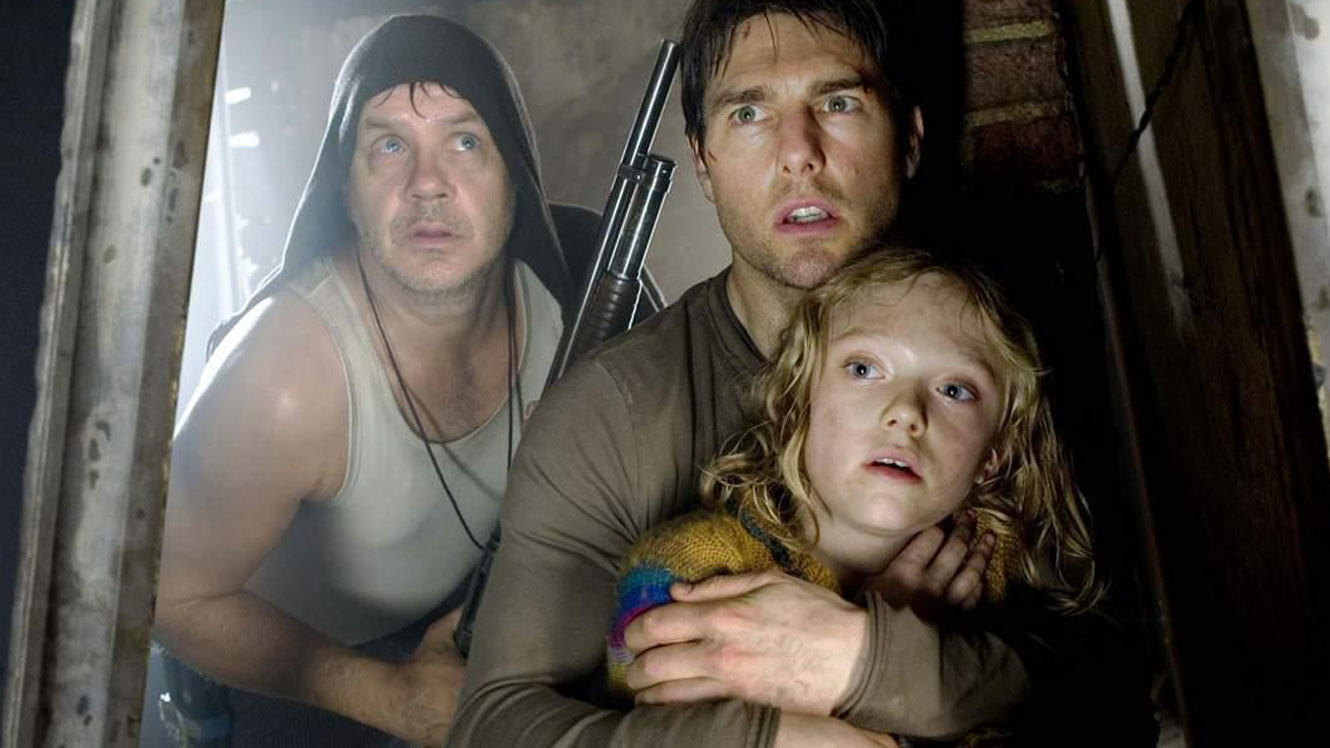 Tom Cruise plays Ray Ferrier, an everyman dock worker and bad father to his two kids, Rachel (Dakota Fanning) and Robbie (Justin Chatwin). It’s his weekend with them, and their mother Mary Ann (Miranda Otto), pregnant with her new husband’s baby, drops them off disapprovingly. Ray makes some half-hearted attempts to engage his children in something that resembles a father-child relationship, but he’s not very good at it. Thankfully for him, he’s let off the hook when a strange lightning storm kicks up, and soon giant robots loom from the earth bent on destruction of everything in their path. Ray, with kids in tow, attempts to catch up with Mary Ann, starting a quest against the odds to reach Boston, which becomes a sort of Oz in this film: everything will be all right when they get to Boston, and Robbie nails it when he points out that Ray is so set on that destination because he can then pawn the kids off on their mother. Along the way, they become separated, and Ray and Rachel spend some scary nights in a basement with a survivalist lunatic (Tim Robbins), while learning more and more about the nefarious plans of the alien invaders.

The film gets a little too much mileage out of closeups of Dakota Fanning’s tear-streaked or screaming face. These seemed more than a little manipulative—how can you not be moved by the crying child? I’ll admit that Fanning, who usually creeps me out, was adequate in this film. But there was one scene that used her in a way that brought all of the criticisms of Spielberg’s technique crashing dismayingly home. To avoid giving too much away, I’ll just say this: it’s a lingering, almost pornographic closeup of Fanning’s face, her eyes concealed by a blindfold put there by her father; she’s singing a lullabye, breathlessly, and crying, while her father is in the other room doing mayhem. It’s a disgusting, cowardly, manipulative scene: disgusting and manipulative because of the way it exploits Fanning’s distress, and cowardly because Spielberg and company lacked the nerve to directly associate the actions in question with the even-toothed megacelebrity. I shudder to say it, but the scene reminded me of the spineless handling of Cole Hauser’s revenge in Paparazzi, which is one of the most reprehensible films I’ve ever seen.

The film also gets a lot of mileage out of references to terrorism and September 11. In the beginning, the kids ask “is it terrorists?”; there’s a disturbing yet beautiful shot of a rain of clothing and dust that recalls shots of debris falling at ground zero; and there are several shots of a wall of pictures of missing people, much like the ones that cropped up in Manhattan. Now, I am not like some people who think that any reference to that horrific event in a film designed to entertain is soulless and unforgivable. In fact, I think that the refusal to think or talk about it—like the insistence on eliminating any scenes that feature the twin towers from films released in the months after the attack—stands in the way of dealing with the tragedy. I don’t believe that any film that shows a plane crash is heartless, and I don’t buy the logic that clucks disapprovingly when buildings fall in movies. Also, harnessing national tragedy in the service of entertainment is no new thing: we’re still finding ways to work Vietnam into movies (there’s even a scene here, aboard a ferry, that suggests the fall of Saigon), and countless films of the 1950s and 1960s played off very real fears of atomic annihilation.

No, the problem here lies mostly in one scene, where a plane crashes on a suburban street, and Cruise and his family narrowly miss being killed. Cruise is out wandering, stunned, through the wreckage—wreckage that is almost devoid of bodies. There are a few, artfully placed in the fuzzy margins of the shots, but where are the torn bodies and unattached limbs that should be littering the street? I guess Spielberg didn’t want to show them, perhaps to save the film’s PG-13 rating, but perhaps because he shrank from showing actual, human casualties of the game he’s created in this film. This isn’t the Spielberg who shot the concussive opening scene of Saving Private Ryan, this is the Spielberg who digitally removed the guns from the FBI agents’ hands in the rerelease of E.T. the Extra-Terrestrial. And at the end of that scene, when the reporters are on their way out because the tripods are approaching, one of them asks Cruise whether he had been on the plane. He says no, and she replies, “That’s too bad. That would have been a really great story.” Not to be trite, but Stevie, people who live in glass houses should not throw stones. In the middle of his summer blockbuster that freely uses the imagery of September 11 in the service of huge opening-weekend grosses, Spielberg takes a poke at a media that capitalizes on tragedy to sell newspapers. I don’t think Spielberg’s use of September 11 is crass, but I think it’s pretty crass to pretend not to see a connection.

The “tripods” were mostly disappointing. Our first look at them was oddly unimpressive, and the film weirdly decided to show us a swarm of them on a tiny video screen in a news van, instead of striding down the East River or something. While they were visually interesting, like an Erector set gone wrong, they were used in an increasingly nonsensical manner. When they first dig themselves out of the ground, they’re bent on destruction, their death rays toppling buildings, ravaging cars, and turning humans into puffs of dust, much like vampires in Buffy the Vampire Slayer—but, strangely enough, sparing the people’s clothes, which drift to earth like leaves. What’s with that, anyway? If the death rays turn carbon-based humans into cigarette ashes, and cut through buildings like a wedding cake, why to they spare the clothes, aside from the fact that it creates a neat visual? But we soon learn that the tripods actually want to feed on humans, not vaporize them, which makes one wonder what the purpose of all the vaporization at the beginning was, aside from the fact that it creates a neat visual. Later still, we learn the tripods’ method of harvesting humans when Cruise witnesses one of them skewering a guy with what looks like the hypodermic attachment on a vacuum cleaner. But wait, that’s not it at all: in fact, the tripods collect crowds of people and then suck them up, one by one, into a vulgar-looking maw, to be puréed and sprayed. So what was the deal with the initial hypodermic attachment, aside from the fact that (you guessed it) it creates a neat visual? And I won’t get into the inherent silliness of the tripods’ grand plan of placing ships underneath the surface of the earth to wait for millions of years—I don’t know, in hopes that humans will someday become plentiful enough to harvest.

But this movie isn’t about special effects and science fiction and mass carnage—honest. It’s about how tragedy brings families closer together; specifically, it’s about fathers and sons. Thematically, this film was quite close to the dreadful The Day After Tomorrow: the widespread disaster, the seemingly pointless trip against all odds to reunite a family. At least there were no wolves in this one. Much of what irritated me about this film was its awkward transitions between disaster mode and family mode. Oh my god! Dozens of people just got vaporized outside, your son is lost, and you’re taking refuge in a basement with a nutjob. None of that is important, though: what’s important is that you’re not a good father, as evidenced by the fact that you don’t know any of the lullabyes. Spielberg’s obsession with fathers and their relationships with their kids showed the most strain in the deliriously happy ending where everyone’s reunited (and I’m not giving anything away—did anyone not think that everything would work out?). It made no narrative sense—the kid was the only survivor of the charge up the hill that reduced everyone else to puffs of dust or flaming kebabs?—and it seemed far too forced, almost surreal, like Boston really is Oz, only minus all the disappointment that went along with Oz. The entire relationship between Ray and his son can be summed up in a cliché: if you love something, set it free, etc. That was the big lesson? And it was packaged in such an awkward and silly way: the film saw it as a moment of growth when Cruise let his son run off to certain death, because, well, someday you have to let go.

It’s not all gloom and disappointment. There are a few scenes that genuinely creeped me out, such as the scene in Mary Ann’s basement, where Ray and his kids have gone to hide, and unknown to them, the tripods down a 747 in the street outside. I really liked the ferry scene, because of its aforementioned summoning of the fall of Saigon, and because it was the first time in the film that the tripods were used to build a slowly approaching dread, as they should have been used throughout. And a throwaway image of people waiting dutifully at a crossing while a train engulfed in flames sped by was simply ingenious. But too often those great visuals are used only in the service of themselves: they sit on the screen like clever little toys on a shelf, while their inventor nudges you in the ribs. They just don’t fit together as a movie. What was lacking, almost throughout, was that Spielberg slickness, which I appreciate even though many people don’t. This film lurched from setpiece to setpiece like it was on three legs.