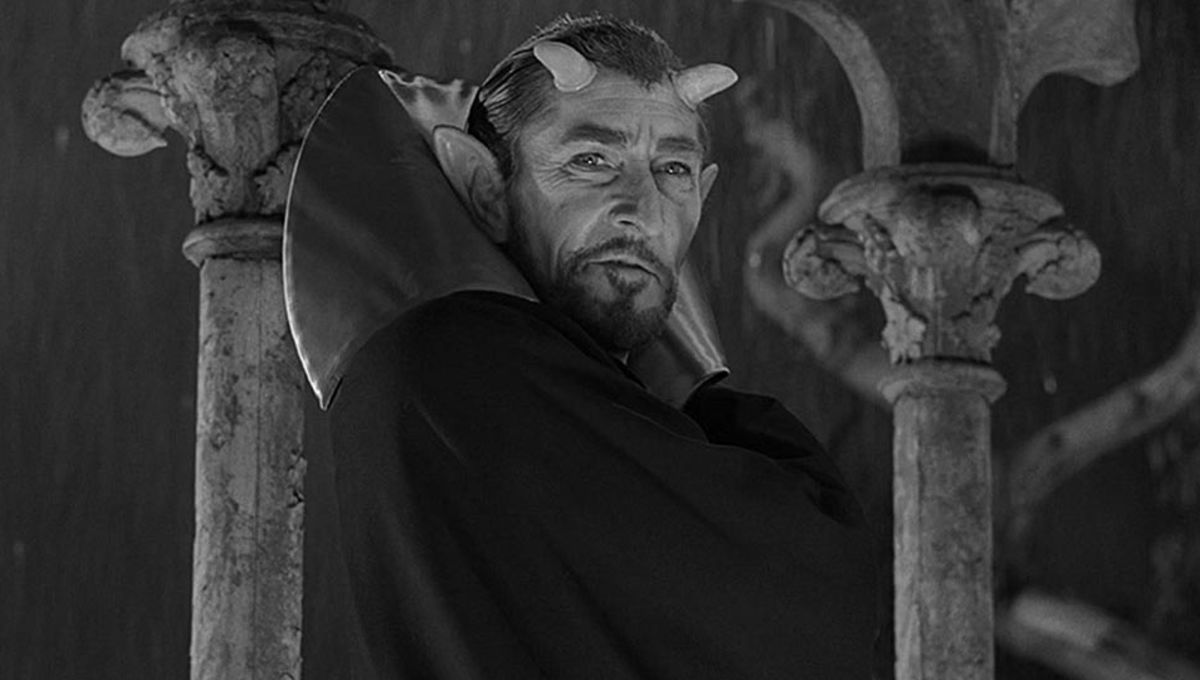 “The Seeing I” by Charles Beaumont

Magazine of Fantasy and Science Fiction, December 1959 (vol. 17, no. 6), pp. 93-97
Reprinted with the kind permission of Christopher Beaumont.

[In December 1959, readers of the Magazine of Fantasy and Science Fiction got a behind-the-scenes account of a new TV series that was in the process of changing television forever. The brilliant writer Charles Beaumont, who died tragically at the age of 38, wrote about his work on the first season, including how Rod Serling approached him and other writers to take a chance on the new show. Here’s the article.]

Now, in the midst of the general—and generally incredible—science fiction depression, there is just cause for rejoicing, for finger-crossing and breath-holding also, plus perfervid prayers to all the available gods. On October 2, 1959, a new television series will be launched. If it is anywhere nearly as successful as certain powers are betting it will be, then the dream of every green-blooded s-f fan will come true and we’ll have, for the first time, decent science fiction and fantasy drama available on a regular basis. If, by any chance, the series should turn out to be as successful as these powers hope (still even money), then something like a revolution will occur. At this stage I cannot imagine any force puissant enough to drive out the westerns and private eyes, but Paladin and Gunn may soon find themselves vying in a three way struggle for public favor.

The series that will spark this revolution, if it first sparks the great American TV audience, is called THE TWILIGHT ZONE. When I first heard about the project, many months ago, I dismissed it with the same keen intuitive sense that led me to dismiss the early Hammer films. I’d been exposed to similar schemes. The Ziv company had tooted its wild tin horn over a new series called WORLD OF GIANTS, which publicists had described as “an ingenious continuing science fiction story.” Joining the herds of excited s-f writers, I trampled over to the studio and discovered that the aforementioned ingenuity applied strictly to the manner in which the good producers had lifted Richard Matheson’s TIHE INCREDIBLE SHRINKING MAN.

WORLD OF GIANTS was nothing more than a cheap adventure series featuring an FBI agent who was six inches tall and traveled in a suitcase but was otherwise undistinguished. Hiring everyone (except, of course, Matheson) to cook up stories for their absurd character, the impresarios of this ill-starred vehicle spent several hundred thousand dollars, then shrugged and wrote the whole mess off to taxes and experience. Prospective sponsors had pole­vaulted away from the show. Which was the greatest, if not the sole, indication of intelligence among the TV advertisers thus far.

To those who have had dealings of any nature with Hollywood, it will come as no surprise that the failure of this dismal bouillabaisse caused other studios to drop their plans for science fiction projects, summarily. The connection seems invisible, but it happens that Ray Bradbury was on the verge of concluding a deal for his own series, titled REPORT FROM SPACE, and that it collapsed shortly after the WOG debacle. My own CHARLES ADDAMS THEATRE, which had the blessing of the Master, died mysteriously. THE HOUSE OF FRANKENSTEIN went up in smoke. THE VEIL was dropped. All other s-f, fantasy and supernatural experiments were cancelled. And I thought, as did everyone else, that we had reached the end of the road without ever having set foot on it.

Then along came the news about THE TWILIGHT ZONE. There were no trumpets, no kettle-drums, not even the usual two­inch headlines. Just a simple notice, buried in the Trades, to the effect that the eminent TV writer Rod Serling was preparing “a series of imaginative stories.” Nothing more. Is it any wonder that we scoffed? What did Rod Serling know about the field, anyway? Sure, he could rip off an occasional Emmy-winning PLAYHOUSE 90 script, but did that give him any right to invade our demesne?

With great misgivings, and after a suitable period of grousing about outsiders and why didn’t the networks buy our shows, we—Richard Matheson, Ray Bradbury and I—agreed to discuss the possibility of joining the program. I don’t know what we expected Serling to be like, but we were all surprised to find that he was a nice guy who happened to love good science fiction and fantasy and saw no reason why it shouldn’t be brought to the screen (or tube). My own resentment vanished during that first meeting. But I still had doubts. Serling’s talk was good, but what about the scripts? The first nine were written by him, based on his story ideas. Wasn’t this a bit cheeky? (“Yes,” said Serling. “However, I had no choice. My promise to write most of the scripts was a very big factor in the network’s acceptance of the project.”) I took the nine home with me, determined to hate them.

Now it is axiomatic that nothing galls a science fiction pro more than to see “an outsider” bumble into the field, rework a whiskered theme which, in his naivete, he takes to be supremely original, and make either, or both, a fortune and a critical splash. There are those of us who will never understand the success of Schute’s pallid ON THE BEACH; those of us who, in the deepest abysses of our hearts, wish the man writhing ill for fattening himself on a repast prepared by others. There are dozens of end­ of-the-world stories by toilers in this special vineyard, and most are superior to the BEACH party. But they are labeled “science fiction” and so must remain buried in the vaults, attics and garages of the faithful few.

Thinking these poisonous thoughts, I read Serling’s first script. It was, or seemed to be, an end-of-the-world story. Resisting the impulse to throw the wretched thing across the room, I read on. A man is alone in a town which shows every sign of having been recently occupied. He finds cigarettes burning in ash trays. Stoves are still warm. Chimneys are smoking. But no one is there, only this one frightened man who can’t even remember his name…

Of course. I thought so at the time, and I think so now. But there was one element in the story which kept me from my customary bitterness. The element was quality. Quality shone on every page. It shone in the dialogue and in the scene set-ups. And because of this, the story seemed fresh and new and powerful. There was one compromise, but it was made solely for the purpose of selling the series.

The second script concerned a prison planet and a mechanical woman.

The third was about a man who returns to the village of his youth and finds nothing changed.

The fourth concerned an unusual pact with the devil…

At midnight, when I’d finished reading the material, I knew that Serling was an “outsider” only in terms of experience; in terms of instinct, he was a veteran. Bradbury and Matheson read the scripts also, and in very little time we all decided to join the TWILIGHT ZONE team.

It’s been exciting work. Serling and his associates Buck Houghton and William Selph are doing their best to make this a first rate production, and with CBS and two important sponsors behind them, that’s the kind of production it’s turning out to be. The budget is among the highest for half-hour dramas. Very little corner-cutting goes on. If a script calls for a collapsing building, then a building is seen to collapse and no nonsense about it. Nor is there any problem about directors and performers, either, as so frequently is the case in television, for a circle of excitement surrounds the show. People want to be associated with it. Among the names connected with segments already finished or about to go before the cameras: (directors) Emmy-winners Robert Stevens and Jack Smight (“Eddie”), Robert Parrish, Mitchell Leisen, Robert Florey (about whom later), and John Brahm (“The Lodger,” “Hangover Square”); and performers David Wayne, Gig Young, Kenneth Haigh (star of Broadway’s “Look Back in Anger”), Dan Duryea, Richard Conte, Ed Wynn, Ida Lupino, Paul Douglas, and Inger Stevens. Authors whose original stories have served as spring-boards for scripts include Lucille Fletcher (“The Hitchhiker”), Paul Fairman (“Brothers Beyond The Void”), Lynn Venable (“Time Enough At Last”), and George Clayton Johnson (“Rubber Face”).

A single example ( chosen because I know it to be true) will suffice, I think, to indicate the quality we may expect. My Playboy story, “Perchance to Dream,” was selected for production a few months ago. Serling told me to dramatize it but to make no changes. He advised me to forget everything I’d learned about television taboos. They didn’t exist on TWILIGHT ZONE. I should do the script the way I saw it, without any thought to the old lady in Dubuque, “who probably has a lot more taste than she’s given credit for.”

Believing the instructions to be well meant but hardly to be taken seriously, I nonetheless did write the script precisely as I saw it. To my amazement, it was happily accepted. Nothing was changed. Not one line. Not one word. Not even the wild technical directions, which called for an impressionistic amusement park, a roller coaster ride and an automobile crash.

It was filmed exactly as written. I know because I was on the set, watching, unable to believe that any of it was truly happening. I’d done over thirty teleplays and seen them spoiled by the hundred-handed companies. But it was happening. An author was seeing his work treated with respect.

The director of “Perchance” was Robert Florey, a horror expert who counts, among other projects, a little thing called “Frankenstein”—for which he conceived the idea and wrote the screenplay, in collaboration. Throughout the TV filming, he strove for quality. It might have been the most expensive MGM feature. He rooted out the meaning of certain lines, frequently surprising me with symbols and shadings I’d neither planned nor suspected. The set was truly impressionistic, recalling the days of “Caligari” and “Liliom.” The costumes were generally perfect. And in the starring role, Richard Conte gave a performance which displayed both intensity and subtlety.

Matheson reports that the same sort of care was shown in the filming of his “Disappearing Act” (from Fantasy and Science Fiction), “Third from the Sun” and “Flight.”

If the show fails, it won’t be because we haven’t tried. Everyone at CBS is pulling for the project. Because everyone knows that with the success of TWILIGHT ZONE, we will enter a new era of TV entertainment. Even now, producers all over Hollywood are waiting, poised, ready to jump aboard. They only want to see whether it’s a band wagon or a funeral cortege.

If you are, if you believe, with me, that a really top grade show of this kind must succeed, then I’d suggest that you begin making out lists of the stories you’d like to see dramatized. And keep those fingers crossed!