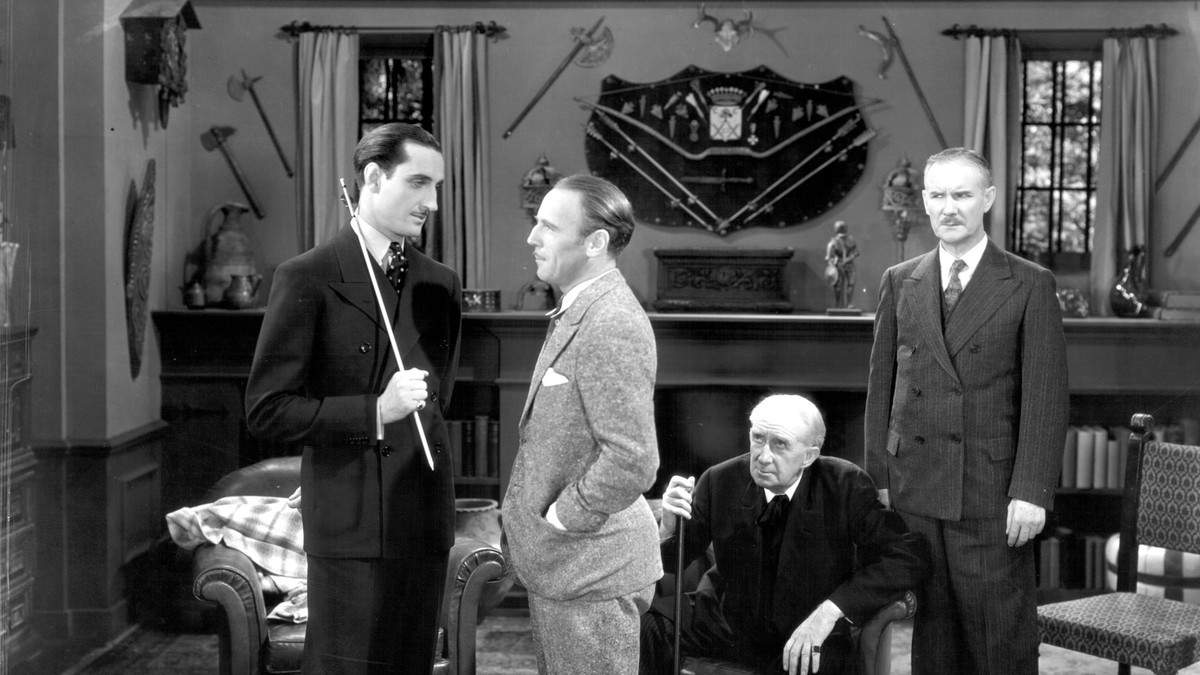 The Sherlock Holmes story “The Adventure of the Six Napoleons” is the source for not one, but two entries in the Basil Rathbone/Nigel Bruce series of Holmes films produced by Universal. This film is a very close adaptation of the story, while Dressed to Kill, produced two years later at the end of the series, is more of an “inspired by” situation. The basic idea is the same: there’s a secret hidden in one of several identical knick-knacks, and bad guys are willing to murder to get ahold of it. Here, as in Sir Arthur Conan Doyle’s original story, the thing is the Borgia Pearl, a gem with a long history of bringing misfortune and death to those who possess it.

We meet up with Holmes in disguise as an elderly priest. He’s riding a boat to Dover, and he’s befriended a young woman (Evelyn Ankers) who is actually a minion of the legendary criminal Giles Conover (Miles Mander). She’s there to steal the Borgia Pearl from the guard transporting it to London. She unwittingly lets Holmes take possession of the pearl, and now Conover is desperate to get it back. The pearl is placed in a museum, and although Holmes warns them that Conover will attempt to steal it, the curator places it on display. Holmes attempts to demonstrate why the security measures they’ve taken are insufficient, leading to what might be the first time that Holmes’s legendary arrogance was the direct cause of a crime. On several occasions, he’s knowingly placed people in harm’s way, sometimes—as in Terror by Night—being responsible for their deaths. Here, he’s directly responsible for the theft of the Borgia Pearl; while he’s demonstrating the flaws in a museum’s security system by disconnecting it, Conover dashes off with the pearl. He’s quickly located, but the pearl is gone. Now Holmes has to find it to regain his reputation. Holmes learns of a series of seemingly unconnected murders—or at least the bumbling Lestrade (Dennis Hoey) thinks they’re unconnected, despite the fact that all of them were killed in the same manner and that the murderer then smashed all of their china.

This film would have been a perfect place to use Holmes’s arch-nemesis, Professor Moriarty. If I have one consistent complaint about this series of films, it’s that Moriarty doesn’t appear often enough: he’s in only three of them, and in only one (The Woman in Green) is he really effective. Instead, we get second-rate villains, like Conover here or Colonel Sebastian Moran in Terror by Night. However, we do meet a memorable villain, the Hoxton Creeper, played by the acromegalic actor Rondo Hatton. The Creeper, unseen except in silhouette for most of the film, murders by breaking the backs of his victims. I could be picky and say that his preferred method, breaking the third lumbar vertebra, is unlikely to produce instant death as it does in the film, but he’s creepy enough to make me not give a hoot. The Creeper was such a hit in this film that Universal brought him back for two horror films in 1946, House of Horror and The Brute Man, before Hatton died of complications from his acromelagy.

Aside from the Creeper, there’s not a lot to distinguish this film. Rathbone is good as always, and he’s allowed a tiny bit of character devlopment when he so royally screws up. Poor Nigel Bruce has only one substantial scene, and it’s of Watson acting like a buffoon. It’s certainly not the worst film in the series, but it’s pretty weak.