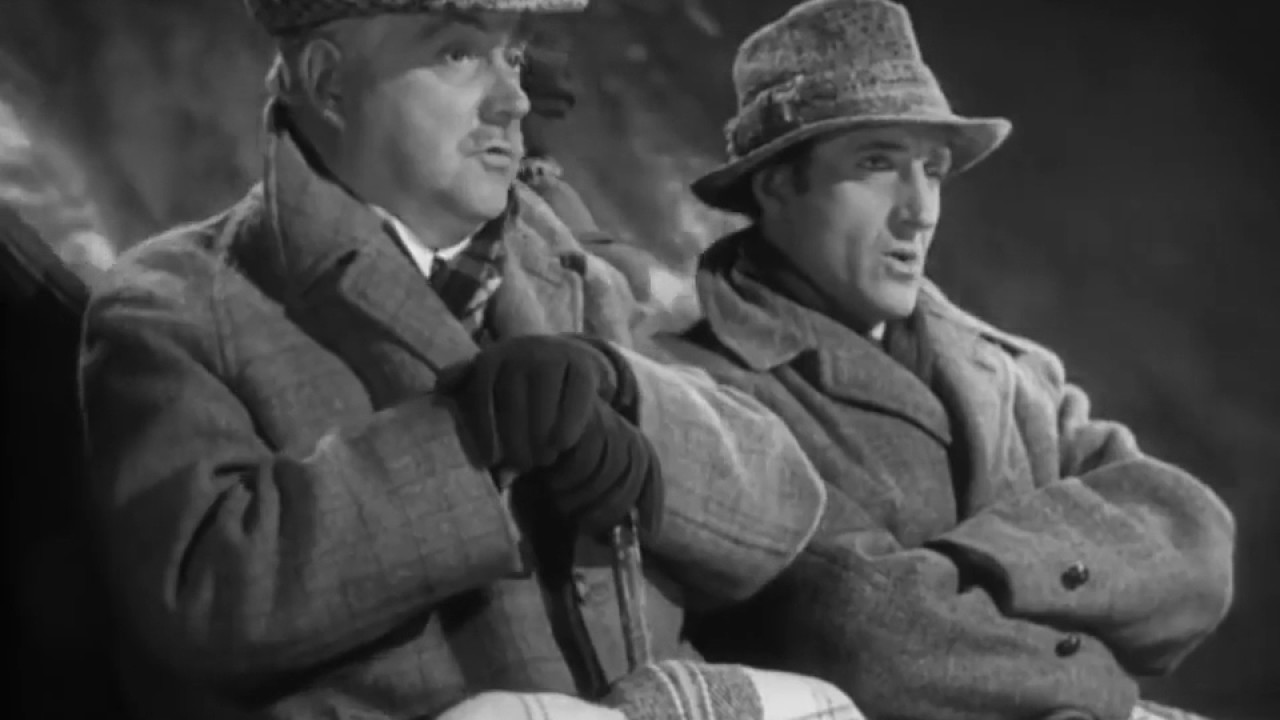 It is my contention that a lot of the problems that people encounter in Gothic horror or mystery films and novels are the result of poor naming: if your hamlet is called Misery End, something bad is bound to happen there. Similarly, a house named Drear Cliff House is bound to attract unhappiness. Just so in this, the tenth of the 14 Basil Rathbone/Nigel Bruce Sherlock Holmes films of the 1930s and 1940s, in which Holmes and his trusty, if somewhat addled, friend Watson are summoned to a creaky old house inhabited by the Good Comrades, an ever-diminishing group of people with big insurance policies. Lately they’ve had a nasty tendency to die in spectacular ways (this house, of course, has a curse: “no man ever goes whole to his grave”), and the insurance company, unhappy about the payouts, enlists Holmes to investigate.

Interestingly, despite Universal’s radical updating of the series to modern times, there’s little updating in evidence here: no automobiles rumble up and down the cobblestones, and the lights at Drear Cliff are powered by oil, not electricity. It could very well have taken place in Edwardian England, but the effect is instead to accentuate Drear House’s dreariness. Other oddities enhance viewers’ experience. It’s one of the few in the series that employs a narrator, and not a major character at that—it’s an insurance agent who brings us up to speed at the beginning and disappears until the end. Director Roy William Neill and cinematographer Virgil Miller use an unusual (for the series, at least as far as I can remember) number of foregrounded objects to frame shots: the camera seems to peer through candelabra and crouch behind chaise lounges, unlike the clear lines of sight favored in the other films. There are a number of exteriors that must have been actually filmed outside, a major departure from the stagebound feel of the rest of the series. And finally, Neill and Miller employ noirishly tilted cameras at times.

There’s the usual late-series overemphasis on using Nigel Bruce and Dennis Hoey (appearing again as Inspector Lestrade) as comic relief, including an uncomfortably long head-scratcher of a scene in which Watson discharges his weapon at phantoms in his room. And Lestrade seems more physically oafish than in the other films. However, this is one of the few entries in which Watson’s tendency to voice premature conclusions about suspects’ guilt turns out to be mostly correct, although he doesn’t always know it at the time, and the traditional last-scene speech by Holmes is a kind and moving reflection on how much he values Watson.

Rathbone is his usual perfection as Holmes, although he employs a more brusque manner toward others: I don’t remember him interrupting people as much in the other films as he does here, but it adds a dimension to his character, a kind of annoyance at being the go-to guy for unexplained phenomena that always turn out to be eminently explainable. The solution to the mystery is easily guessed at, although that might be because I vaguely remember reading the original story, “The Adventure of the Five Orange Pips.” It’s middle-of-the-pack entry in the series, neither up to the standards of the first two films nor as abject as Pursuit to Algiers.