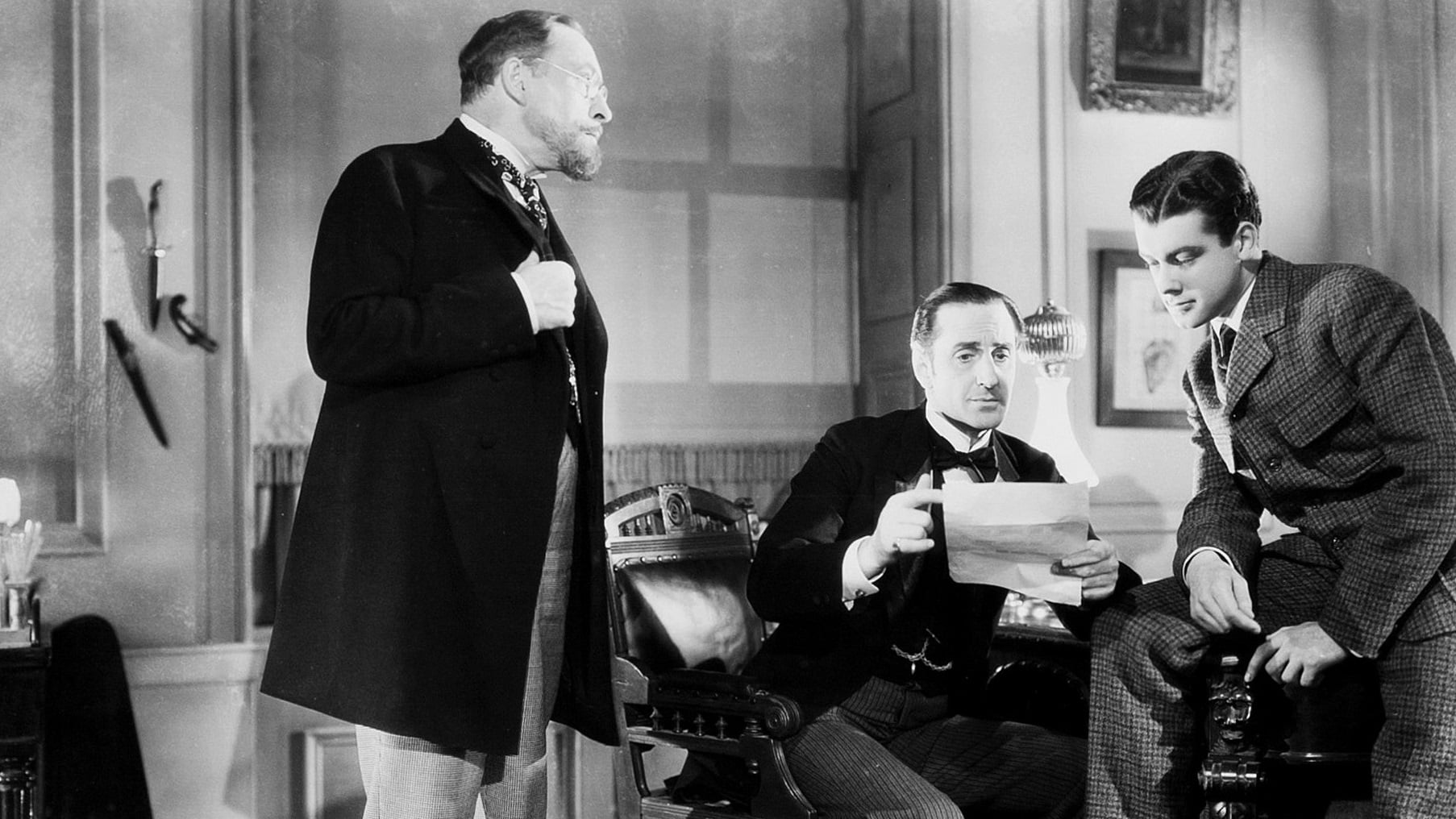 There have been at least twenty film versions of this, Arthur Conan Doyle’s most famous story. In addition to the films admittedly based on it, there are countless others that clearly take their inspiration from it. It might be because it’s one of his few novel-length works; shorter works would require a lot of padding, or, like the later films in this series, the creation of an entirely new story. But there’s also something elemental (if not elementary) about the story that appeals to our seemingly insatiable desire for a good supernatural mystery.

This was the first teaming of Basil Rathbone and Nigel Bruce as Sherlock Holmes and his assistant, Watson. I had never seen one of these films before, but when I started reading the collected Sherlock Holmes stories last year, it was Rathbone’s face that I saw while I read them. Strangely enough, I didn’t see Bruce as Watson, perhaps because the Watson of the stories is clearly a younger man than Bruce, or perhaps because I wasn’t familiar with Bruce from other films. Apparently, his later incarnations of Watson turn him into a brainless comic sidekick, so I’m glad I started here.

Dr. Mortimer (Lionel Atwill) comes to Holmes and Watson with a frightful tale: the Baskerville family is cursed, doomed to die at the teeth of an infernal, spectral hound since an ancestor’s brutal kidnapping of a village girl. The latest to go, Sir Charles, was a friend of Mortimer’s, and the elderly doctor wants Holmes’s help in preventing the same fate from befalling Sir Henry (Richard Greene), the Canadian son of the late Baskerville. Holmes agrees to take the case, although he doubts the supernatural angle. He is intrigued even more when an attempt is made on Sir Henry’s life within hours of his arrival.

One odd thing about this, the most famous Sherlock Holmes story, is that Holmes is absent for the entire second act. After sending Watson to the Baskerville estate in Sir Henry’s company, Holmes disappears. The story then turns into a sort of mystery spoof, where the easily-rattled Watson has to face the fog-cloaked moors and the mythical beast without his better half. Suspects abound: is it the widow’s-peaked butler Barryman (John Carradine) and his ugly wife (Eily Malyon), who seem to be signaling to an unknown party in the moors? Is it that unknown party (Nigel De Brulier), a wild-haired madman who attempts to squash Watson and Henry with a boulder? Is it John Stapleton (Morton Lowry), the glad-handing young man who lives across the moor, whose sister Beryl (Wendy Barrie) quickly develops a romance with Sir Henry? Or is it actually a huge, spectral hound?

Although it was filmed entirely in Fox’s studios, there is plenty of foggy atmosphere to this film. The moors are convincingly eerie, and at times you can forget that it’s all built from plaster. The Great Grimpen Mire set was reportedly so enormous that Richard Greene got lost in it. The Hound, when it makes its appearance, is actually frightening (even though, in retrospect, it was just a Great Dane), and the scene when it attacks one of the characters is suitably vicious.

The film is chock-full of great supporting talent. Oddly enough, that supporting talent includes Rathbone and Bruce: the film was conceived as a starring vehicle for Richard Greene, who received top billing. The always dependable Lionel Atwill gets to play a doctor again, albeit not a mad one this time around. John Carradine, who has failed to impress me in other films, was suitably ominous here. A moment of comic relief comes from Barlowe Borland as a lawsuit-happy neighbor.

After this, Rathbone and Bruce filmed The Adventures of Sherlock Holmes for Fox, and then Universal took over, transplanting the dynamic duo to the twentieth century and having them deal with contemporary crimes in another twelve films. I’m not sure how I feel about that. I guess I’ll find out when I watch them.

Crazily enough, there’s only one supporting actor who went on to play different roles in other Sherlock Holmes films: David Thursby, who played the open carriage driver here, his first of three appearances in the series.