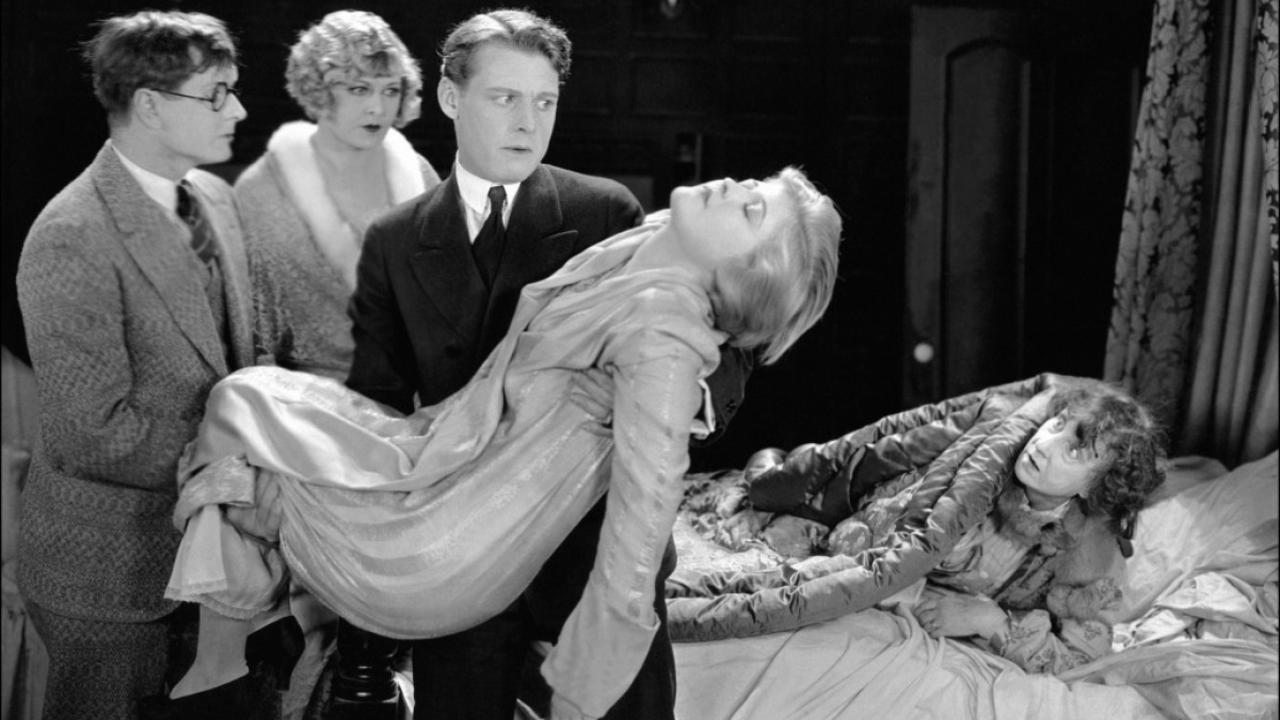 John Willard’s play The Cat and the Canary opened on Broadway in 1922 and ran for 148 performances; it was part of a mini-trend of “old dark house” melodramas in which unsuspecting innocents (and not-so-innocents) gather in a spooky old mansion replete with monsters and ghosts that turn out in the end to have been human beings in devious disguises. As might be obvious, these plays and their popular film descendents inspired the cartoon Scooby-Doo, whose semi-ridiculous trapdoors, hidden passages, and criminals in elaborate masks don’t seem so ridiculous after seeing the very same things in this film, one of the most popular “horror” films of the silent period.

If one can call it horror. There are certainly some chilling images in Paul Leni’s 1927 screen adaptation of the hit play, and I’m guessing that to a contemporary audience, some of them might have been quite shocking. But even granting the film’s deliberate efforts to frighten, there’s more of an effort to reassure the viewer that this is just a silly diversion, that you can scream if you want to—it makes the proceedings more enjoyable—but everything will turn out all right in the end. For starters, nearly a third of the credited cast are there as comic relief, and an inordinate amount of screen time is devoted to their exaggerated reactions to real and imagined shocks. So it’s not exactly a horror film, at least by any strict definition. But it is a great deal of fun.

Twenty years ago, Cyrus West, driven insane by his scheming relatives’ obsession with his considerable fortune, wrote a will that was not to be opened until tonight at midnight. His surviving relatives have gathered at his spooky old mansion for the reading. Among them are the milquetoast Paul Jones (Creighton Hale), the brooding Harry (Arthur Edmund Carewe), the handsome Charlie (Forrest Stanley), the highstrung Aunt Sillsby (Flora Finch) and her pretty neice Cecily (Gertrude Astor), and Cyrus’s beautiful neice Annabelle, played by silent star Laura La Plante. When lawyer Roger Crosby (Tully Marshall) reads the will, it turns out that Annabelle will inherit the riches, but only if she’s deemed sane by a psychiatrist; if she’s insane, the person whose name appears in another envelope gets the dough. This sets off a chain of surprising disappearances, shocking appearances, gnarled clawlike hands emerging from hidden compartments in the walls, and related shenanigans as circumstances, an escaped lunatic, and perhaps a relative or two conspire to render Annabelle insane before dawn.

Leni, already a gifted director and set designer before he came to the United States in 1927, and cinematographer Gilbert Warrenton (whose few triumphs in a career of undistinguished films convince me that his directors did the bulk of the shot setups) use a fluidly moving camera and elaborate, expressionist sets and lighting to achieve some of the most memorable shots in silent film, from the extraordinary opening multiple exposures of Cyrus West trapped in medicine bottles and menaced by cats, to the amazing tracking shots down the curtain-lined main hallway, to the dramatic zooms and pans that accompany the film’s shocks. These visual creations are ingeniously coupled with a wide palette of tinting to provoke gasps and laughter in equal measure. And unlike many silent films, which relied too much on redundant intertitles, Leni and company not only eschew all but the most important titles, but they often do more than simply provide words on a screen: these titles dance, wiggle, and melt off the screen, happy to be put to more use than simply imparting information.

In fact, the film is so atmospheric and lively that it makes me doubly sad that its director, Paul Leni, made so few films—including The Man Who Laughs and The Last Warning—before he died in 1929 at the age of 45. Could his career have survived the talkie transition? It’s tantalizing to wonder whether his version of Dracula, planned but never completed because of his untimely death and the return of his chosen star, Conrad Veidt, to Germany, would have been better than Tod Browning’s stodgy, unimaginative potboiler, but after viewing this film, the answer is manifestly apparent—of course it would have been better.