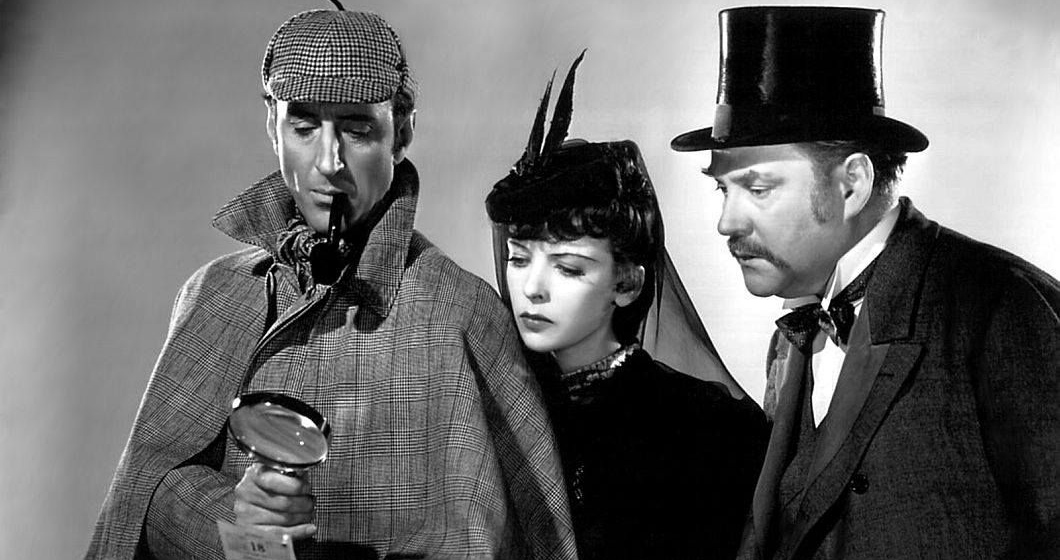 Basil Rathbone and Nigel Bruce return for the second time as Sherlock Holmes and Dr. Watson in this enjoyable, suspenseful film, the last in the series to be set in Victorian England. For their second outing, they face off against Dr. Moriarty himself (George Zucco), Holmes’s arch-enemy. The film is the perfect blend of mystery and comedy, showing off the series’s potential for both. The only real problem with this film is a rather disappointing Moriarty; Zucco looks a tad too… ordinary. For master criminals of the Victorian era, I want flowing overcoats, black hair in a widow’s peak, and fiendish laughter, not some guy who looks like… well, like a professor.

The film opens with the diabolical Moriarty defeating justice yet again. A jury grudgingly finds him not guilty of some horrific crime or another just seconds before Holmes rushes in with damning evidence. The best scene in the film comes as the two bitter enemies leave the courtroom; the two share a cab home while discussing their mutual hatred and desire for revenge, and Moriarty promises that his next caper will be so brilliant that it defeats even the mind of Holmes.

As Holmes and Watson settle down to wait for clues to Moriarty’s next plan, Moriarty concocts not one but two mysteries, one of them designed to distract Holmes from the real caper. Knowing Holmes’s attraction to women in peril, he devises a diabolical, murderous plot that resurrects a decades-old murder—surely a lot of trouble to go through just to distract Holmes, but then again, Moriarty’s not a very nice guy, and he doesn’t care who thinks so. There’s a wonderful exchange between him and Bassick (Arthur Hohl), one of his henchmen; when Moriarty informs him what his role will be, Bassick laments what happened to the last person Moriarty enlisted. “Oh, poor Higgins,” says Moriarty. “They found nothing but his boots!” To which Bassick replies indignantly, “One boot!”

The real crime is the theft of a famous emerald from among the Crown Jewels. Moriarty actually sends a letter to Ronald Ramsgate (Henry Stephenson), the caretaker of the jewels, threatening to steal it. Ramsgate attempts to enlist Holmes’s help, but Holmes is distracted by the sad case of the Brandon family. Ten years earlier, the elder Brandon was murdered in South America; now, the younger generation of Brandons, including the nance Lloyd (Peter Willes) and the beautiful young Ann (Ida Lupino), are receiving strange, threatening drawings inscribed with ominous dates. Holmes decides that he must protect Ann (he doesn’t do Lloyd much good), and he sets out to solve the mystery and save Ann from a dreadful murder. Ann’s fiance Jerrold (Alan Marshal) attempts to stop Ann from enlisting Holmes, setting himself up as a likely suspect. Intrigue ensues.

Director Alfred L. Werker paces the film perfectly, with just the right blend of tense scenes and opportunities to catch one’s breath. There are two show-stopping scenes, one in which Ann is chased through a foggy park and the final showdown between Holmes and Moriarty in a dazzling Tower of London set. The sham case Moriarty cooks up is textbook Sherlock Holmes, and it’s set up so that all along, we are shouting at Holmes to ingore all of the red herrings and stop Moriarty; it’s only during the down times that we realize that even though the Brandon case is just a distraction, it’s time better spent for Holmes to save Ann than to save the Crown Jewels.

Rathbone and Bruce took three years off before resuming their roles in twelve more films in the space of four years; these new scenes transplanted the dynamic duo to the twentieth century and turned Watson into little more than comic relief. There are comedic scenes in this film, but Watson isn’t a clown. One good example occurs when Watson is lying on the cobblestones at a murder site while Holmes is off measuring things in the bushes. A gentlemanly passerby inquires as to his well-being, and the two have a humorous exchange that has Watson being the source of the comedy without being the butt of the joke.