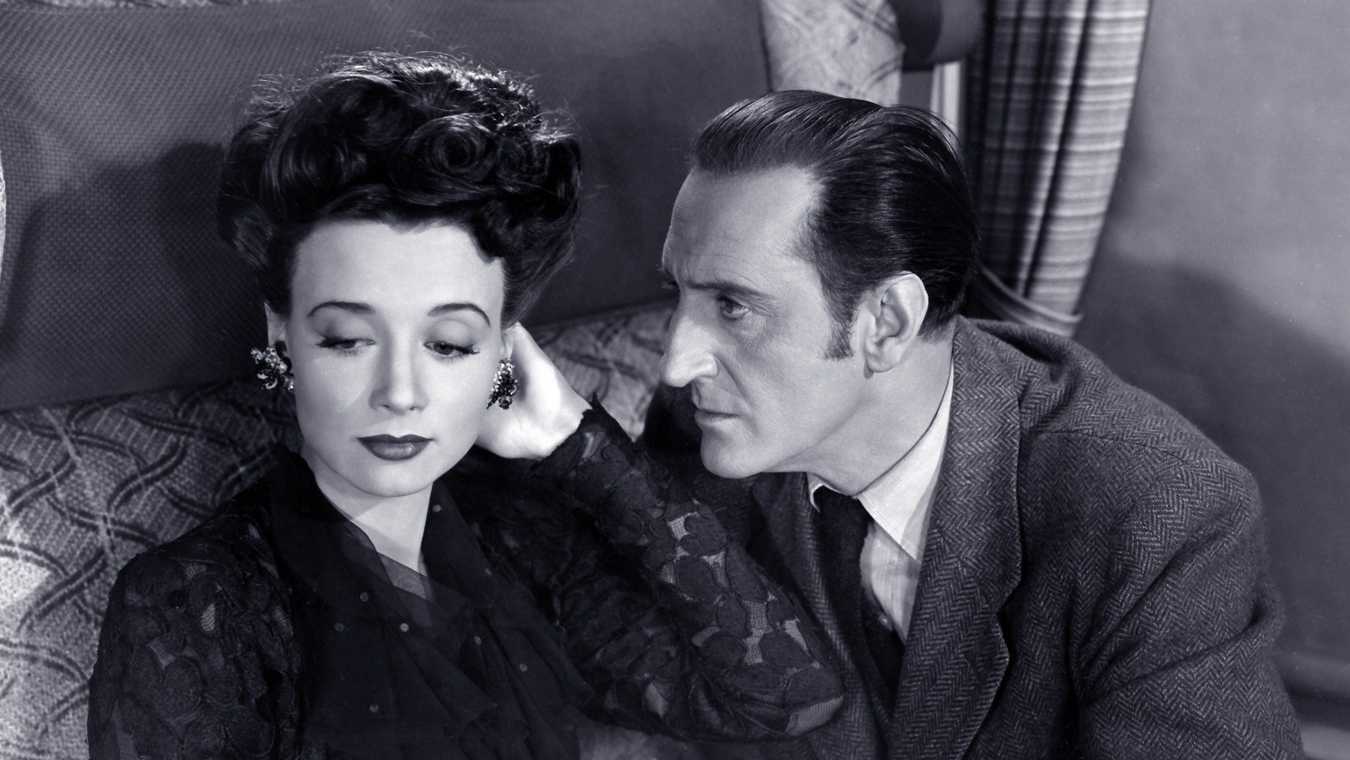 The penultimate film in the popular Basil Rathbone/Nigel Bruce series of Sherlock Holmes films is a lesser entry, flawed by too much reliance on Bruce’s Dr. Watson and Dennis Hoey’s Lestrade for comic relief, as well as an Agatha Christie–level bevy of red herring suspects. Rathbone is good as usual, and this film is one of the first to demonstrate the seeming heartlessness of the master detective as originally conceived by Sir Arthur Conan Doyle—these things make it better than, say, the previous entry, Pursuit to Algiers. But it’s obvious that the series was limping to a close.

Holmes and Watson are again playing nursemaids, but this time to a valuable diamond, the Star of Rhodesia, a stone whose history is marked by the painful deaths of those who have owned it. Now it’s in possession of Lady Margaret Carstairs (Mary Forbes, appearing in her third film in the series), an irritable woman who insults Holmes and Watson by implying that they’re policemen for hire. She’s taking the train from London to Edinburgh, and her son Ronald (Geoffrey Steele) has enlisted the master detective and his increasingly bumbling sidekick to prevent the theft of the diamond.

Quickly, Ronald winds up poisoned and the diamond disappears. The traincar in which they’re riding is full of suspects. Vivian Vedder (Renee Godfrey) is a suspicious-acting young woman transporting her dead mother’s coffin to Edinburgh; she seems to want to keep track of Holmes. Professor Kilbane (Frederick Worlock) is an ill-tempered mathematician who refuses to cooperate with their investigation. We overhear a nervous older couple (Janet Murdoch and Gerald Hamer, the latter in his fifth Holmes film) fretting at the presence of Scotland Yard detective Lestrade (Dennis Hoey) aboard the train. And Watson’s old friend from the army, Major Duncan-Bleek (Alan Mowbray), seems to be very interested in the case. Holmes comes to the conclusion—unsupported by any evidence, as far as I can tell—that the crime is the handiwork of the late Professor Moriarty’s chief henchman, Colonel Sebastian Moran. He must figure out which of the passengers is Moran before they reach Edinburgh. Since all of this takes place on a train, you know going in that someone will attempt to push Holmes out of it. That’s really the only suspense to be had in the film: when will someone try to kill Holmes? The rest of the film feels rather perfunctory.

Nigel Bruce is mistreated by the script. This is the first film in the series that uses him for more comic relief than is necessary. The scenes where he fumbles through attempted interrogations of suspects cross the line into mean-spiritedness. This is a far cry from the Watson of Doyle’s stories. Similarly, Dennis Hoey’s Lestrade is good for little more than laughs, although I admit that this is closer in spirit to the stories. But in this very short film—at 60 minutes, it’s the shortest in the series—so much comic relief feels like desperate attempts to pad an already skimpy story.

The heartlessness I mentioned comes with the revelation that the diamond in Lady Carstairs’s box is in fact a fake: Holmes had the real diamond the whole time. This means that Holmes, who knew that someone would attempt to steal it, and knew that the thief was unlikely to care about taking lives to get the diamond, put Ronald Carstairs in mortal danger for no reason other than to draw out the thief—a plan that failed, since it still took Holmes some time to figure out the guilty party. This is the Holmes of the books peeking through, the Holmes who sometimes looked at other people like bugs, who sometimes viewed a good mystery as being more interesting than keeping people out of danger.

Although the Internet Movie Database claims that this film is based on a Doyle story, I can find no evidence for this story’s existence. Certainly Colonel Sebastian Moran existed in Doyle’s stories, but Jack Tracy’s Encyclopedia Sherlockania makes no mention of the Star of Rhodesia.