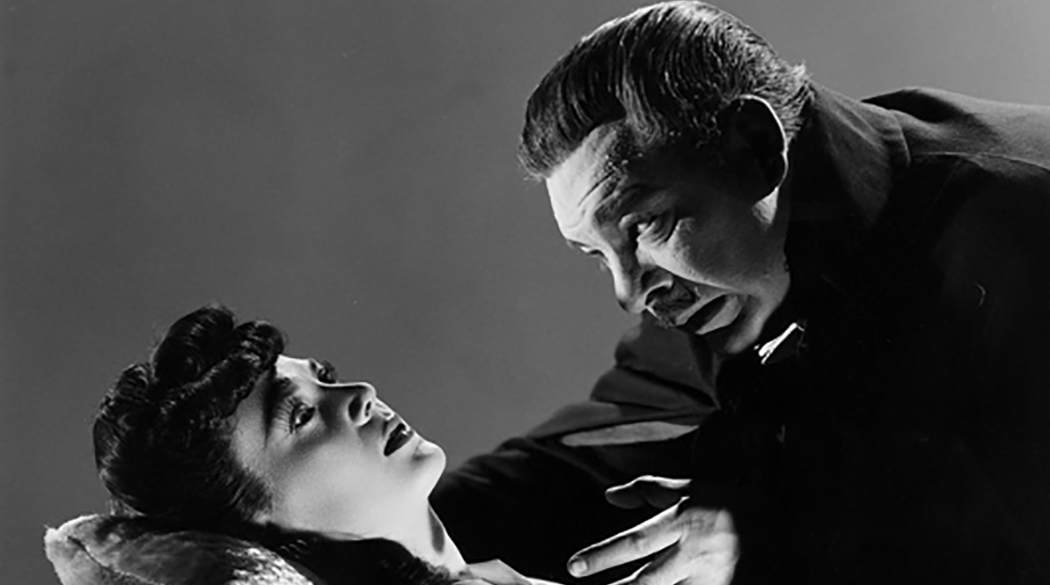 By 1943, the Dracula family had fallen on hard times. After being staked to death in 1931’s tepid Dracula, his corpse (or a wax dummy of Bela Lugosi) was burned by his ungrateful daughter in 1936’s Dracula’s Daughter. Now his son is an itinerant vampire: uprooted from his native land, he finds himself in the swamps of Louisiana looking for a rich woman to marry. His lodgings, always a little seedy—in the past, the family called various deserted castles home—have hit the bottom, as he takes up residence in a coffin sunk in a drainage ditch while he hatches his plans for upward mobility.

But the biggest letdown for the family is Lon Chaney Jr. as Count Alucard. I can’t imaging a worse casting choice. Chaney’s farm-boy body and fleshy face can’t begin to summon the least bit of menace; his ponderous line readings don’t sound like the unfamiliar grasp of English that Lugosi demonstrated, but just an inability to convince. There’s only one scene where he’s convincing, and it’s his last scene in the film. It doesn’t help that he’s playing a Dracula so down on his luck that his choice of bride turns out to be basically a femme fatale who’s just using him to achieve eternal life.

Kay (Louise Allbritton), a morose, dark-haired southern belle, invites a Hungarian count to come visit her in Louisiana. This quickly leads to problems, as this Count Alucard is in fact the titular son of Dracula. That it takes so long for anyone to figure out the pitifully disguised name is another matter entirely. He does away with her father and convinces her to drive away her suitor Frank (Robert Paige), and then he marries her so as to take over her estate and live forever by her side. Two doctors, the local doctor Harry Brewster (Frank Craven) and his Hungarian friend Laszlo (J. Edward Bromberg) figure out Dracula’s plans, and they have to attempt to stop him before he causes more mayhem.

Aside from the big hole named Chaney in the middle of the film, this is one of the most interesting, if not necessarily very good, entries in Universal’s long-running series of monster movies. It serves as a curious reflection of the wartime attitudes of Hollywood and the stark difference that a Production Code could make. It has some nice atmospheric touches, but for the most part that aspect is lacking. Robert Siodmak, yet to emerge from Universal’s stable of B-movie directors, manages some tension, but there’s little evidence of the master who would direct The Killers and Criss Cross a few years later. There are a couple of nice touches: as Laszlo and Brewster are discussing the vampire’s ability to turn into a mist, Dracula chooses that method to pop in on them; and the wordless ending is the best scene in the film.

In 1931, Dracula was free to attack whomever he wanted, male and female alike. By 1943, his diet was quite restricted. It’s amusing to note that the only characters that Alucard bites in an unfriendly manner are men, first Kay’s father and later a young boy. To get his teeth into a woman, he first has to marry her; the sight of him escorting his young bride to the justice of the peace in the dead of night would have had his father rolling in his grave, if his corpse weren’t already barbecued. In fact, there’s little evidence he ever gets his teeth into her. The one time we see him leaning in laciviously (on their wedding night) turns out badly for him—the scene gives the term coitus interruptus a new meaning. One of the many confusing aspects of this film is a discussion between the two doctors about how Kay somehow willed herself into becoming a vampire by the power of her excessive morbidity; this goes against most vampire mythology and takes away poor Dracula’s opportunity to exercise his libido.

That’s not the only revision in the mythology. We notice early on that Dracula no longer needs an invitation to enter a house. If I remember correctly, bullets used to hit vampires but not harm them, but now they fly right through them. At one point, the good doctor cures the young boy by tracing small crosses of iodine on the bites on his neck, which seems like a new addition to the canon.

A fascinating relic of the film’s wartime inception is Alucard’s vaguely fascist attitudes about race. He dismisses his Rumanian homeland as being “red with the blood of a hundred races,” and he praises America as “a young and vital race.” Later, he confirms that he’s here “because this is a young and virile race, not dry and decadent like ours.” Whether it was an explicit attempt to work in some anti-Nazi (or at least anti-eugenics) messages, or whether it was just part of 1940s zeitgeist, it was one of the elements that makes this film worth a look.