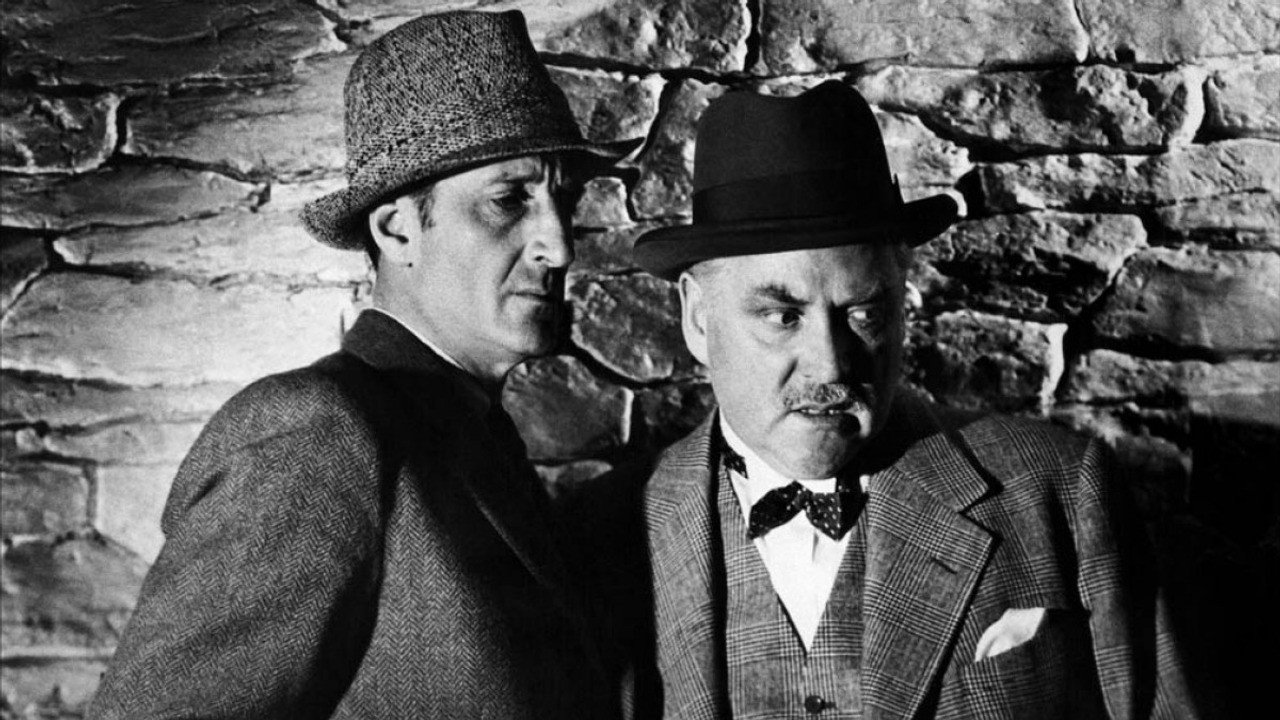 Once you get over the studied weirdness of seeing Holmes and Watson running around in modern dress, riding in cars, and dealing with World War II issues, these films settle down into an enjoyable, if never groundbreaking, series of entertainments. Sometimes repetition in film can be annoying, and sometimes it can be comforting. I’m sure by the end of this fourteen-film series, hearing Holmes say “It’s elementary, my dear Watson” or “Watson is the very soul of discretion” might get tiring, as might hearing Watson say “It’s clear as mud to me.” But at this point, after seeing only three of the films, it’s still charming, like a comfortable pair of well-worn slippers.

This film is a marked improvement over the first Universal, modernized film, Sherlock Holmes and the Voice of Terror. This is the fifth film in the series, and the third since the transplant to the 20th century. It again features the timeless duo of Basil Rathbone as Holmes and Nigel Bruce as his dedicated, if ever-more-daft, assistant Watson. It’s a fun movie, with a clever premise and the usual dependable performances by Rathbone and Bruce, and it works because it feels more decidedly like one of Arthur Conan Doyle’s short stories: it’s focused, and it all ties up rather neatly.

War is afoot, and the British government must get a secret document to the Americans. The bad guys know that someone on a British military flight to the United States is carrying the document, but they don’t know who. Among the suspects are Sir Henry (Gilbert Emery) and John Grayson (Gerald Hamer). When the flight lands in New York, the passengers enter a train car bound for Washington, and the bad guys have them trapped, if only they can figure out who has the document. They decide it must be Grayson after a Holmes-worthy bout of deductive reasoning, and they arrange a daring kidnapping. But Grayson got rid of the document somehow, and the bad guys must track it down. Possible recipients include the bellicose Senator Babcock (Thurston Hall), mouse woman Mrs. Pringle (Margaret Seddon), and the beautiful young Nancy Partridge (Marjorie Lord).

When Grayson turns up missing, the British Home Office calls on Holmes (and, of course, Watson). Tickled at the prospect of going to the States, Watson amusingly embarks on a quest to learn local customs, leading to some funny scenes where he attempts to use American slang—scenes that reminded me, with good reason, of Star Trek IV: The Voyage Home. Holmes isn’t as interested in the setting, of course: he wants to know everything there is to know about Grayson, who turns out to have been a secret agent named Pettibone. He discovers that Pettibone made microfilms of the documents and hid them in a matchbook. The pair set off on a bomber to America, hoping to find that matchbook before the bad guys figure out how and where the documents were hidden.

Meanwhile, the bad guys, led by criminal mastermind George Stanley (George Zucco), a former German agent, have been robbing and ransacking the homes of the people who were on that train car. I was a little disappointed to learn that Zucco, who played Moriarty in The Adventures of Sherlock Holmes, played a different character here. I’d have loved to see the two face off in modern times (something that happened the year before in The Secret Weapon, which I haven’t seen yet). However, I have to admit that Zucco makes a better American criminal in disguise as an antiques dealer than he did as Holmes’s arch-nemesis. After Stanley’s thugs kidnap Nancy Partridge—who, unknown to her, has the matchbook, which Grayson dropped in her purse before being kidnapped—Holmes must use his super-deduction to track the gang down and save both Partridge and the microfilm.

There are signs that the filmmakers were starting to realize that the iconic scenes in which Holmes deduces the entire history of a subject or item from a cursory glance with a magnifying glass were becoming a little silly, and they wisely played up the one here. After complimenting the American investigators on their high-tech methods, he uses his trusty glass to examine a blanket and figures out the entire mystery. The highlight of the film is a dazzling dinner party where the diners trade off the pack of matches as the camera struggles to keep up. It goes from good guy to bad guy and back, even resting for a moment in the hands of the man who was intended to receive it, until it ends up back in Partridge’s purse just before she’s kidnapped. It was an almost Hitchcockian display of cinematic virtuosity, and director Roy William Neill (who directed eleven films in the series before dying immediately after the last one was released) keeps up the tension as the matchbook winds up in Stanley’s possession without his knowledge of its contents. Lynn Riggs, who wrote the deficient Voice of Terror, and Bertram Millhauser, who would go on to write three more Holmes films, keep things moving with deftly paced scenes and snappy dialog. There’s not a wasted moment in the film, from the nail-biter of an opening to the satisfying closing battle of brains between Holmes and Stanley. Any guesses who wins?