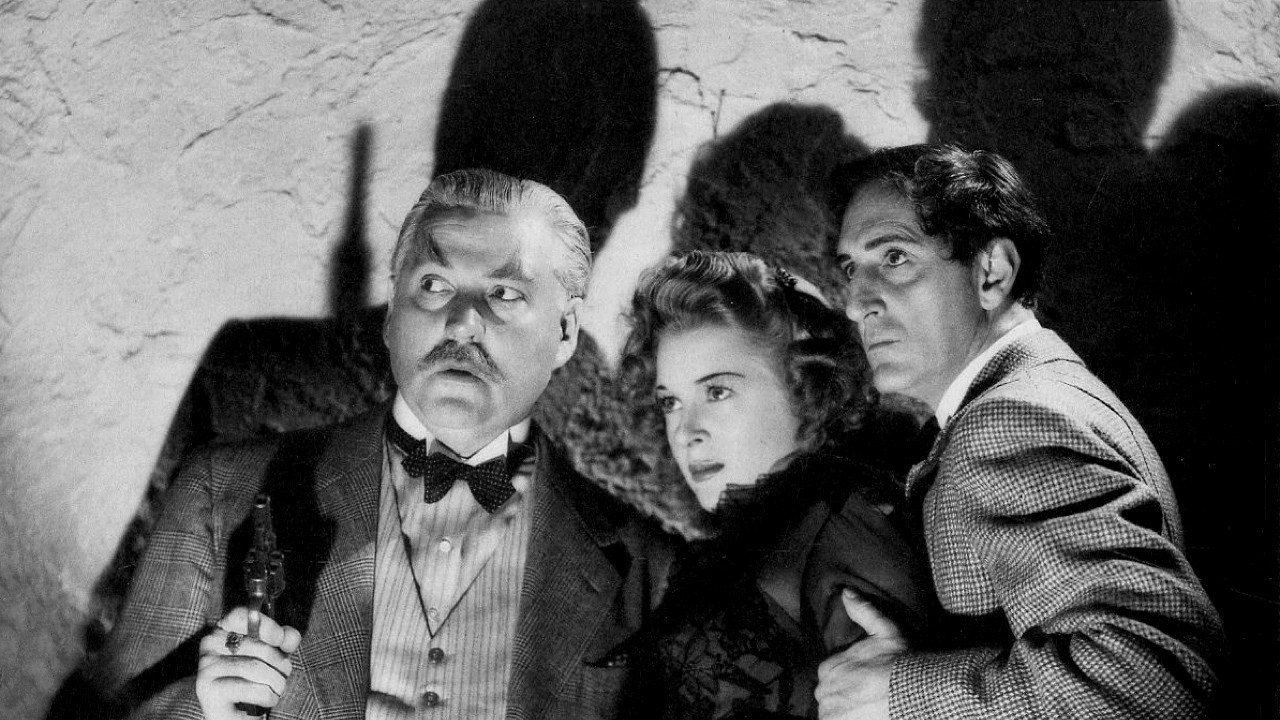 This first, “modernized” entry in the long-running Rathbone/Bruce series of Sherlock Holmes films can’t be described as a rousing success. In fact, I wouldn’t count it as a success at all. When Universal decided to revive the Holmes series by placing them in modern times and having them deal with modern problems, it was bound to undergo some growing pains; those pains are quite apparent here. The film is loosely based on one of Arthur Conan Doyle’s original Sherlock Holmes stories, “His Last Bow,” but it doesn’t feel right. Perhaps the studio hadn’t quite nailed down a formula; I don’t know, as I haven’t seen the later entries yet. Perhaps I just balk at hearing Sherlock Holmes shout “The Nazis killed him!”

It’s 1942, or thereabouts, and in a thrilling, perfectly constructed opening, we learn of the Voice of Terror, a taunting Nazi propagandist who berates the British for being weak and taunts them about a series of terrorist attacks carried out by Nazi agents operating with impunity. The authorities have no way of stopping the attacks or of finding out who the voice of terror really is, and the people of Britain are getting spooked. At a high-security meeting of a group called “The Council” (of what, I don’t know), Sir Evan Barnham (Reginald Denny) informs his colleagues that he’s solicited the help of the legendary detective. The other members of the council, especially Sir Alfred Lloyd (Henry Daniell), are upset at bringing in an eccentric civilian on the case, but when Holmes (Basil Rathbone) and Watson (Nigel Bruce) show up and give one of Holmes’s patented “you ate Brie on Tottenham Road last Tuesday” demonstrations of his deductive reasoning, they mostly agree to let him help.

When Holmes’s assistant Gavin (Robert Barron) is murdered by a mysterious Bavarian knife-thrower, Holmes turns to London’s underworld for assistance, beseeching his widow Kitty (Evelyn Ankers) to help him not for her own sake but for the sake of England. The scene where Holmes and then Kitty appeal to the assorted lowlifes and criminals in a shady bar is a bit tough to watch; Universal used the revived series, like most films released during the war, to trumpet patriotism and pro-Allied gung-ho can-do-it-ness. It hasn’t aged well at all, coming off as shrill and completely incongruous for Arthur Conan Doyle’s character. The criminal element fall in line behind Holmes, serving as his super-efficient information-gathering squad and ready muscle. Holmes quickly tracks the voice of terror to its source, and that’s when it all gets highly silly.

The rest of the film, from the revelation of the covert Nazi agent’s identity to the finale, where we learn the identity of the inner-circle diplomat responsible for information leaks, depends on two incredible and impossible bits of knowledge that Holmes acquires without any apparent source. It’s as if the screenwriters couldn’t be bothered to explain how he came to know these tidbits; it’s Sherlock Holmes, perhaps they argued, and he knows stuff like that. Or perhaps the film’s short 66-minute running time prevented them from filling in the Maginot line of plot holes. First is the identity of the Nazi agent, a man named Meade (Thomas Gomez). Can anyone explain how Holmes got from letting Meade escape the waterfront warehouse to knowing his name and address? Holmes enlists the help of Kitty again, sending her to infiltrate Meade’s affections and figure out his grand plans. The second big revelation comes at the end, when Holmes reveals that a major character is in fact a fraud, a German plant done up to look like a British nobleman and inserted into British society back in 1924, when, apparently, the Germans were already planning World War II. Holmes orchestrates one of his patented gatherings-of-suspects and dramatically reveals his damning information, and I guess viewers were supposed to be so shocked that they wouldn’t question the source of Holmes’s information.

The sense that this Holmes is disconnected from his past incarnations did not abate throughout. Time after time, I was taken out of the film, reacting to such things as Holmes’s modern haircut and the fedora he wears (although there’s a funny scene where he’s about to put on his signature deerstalker and Watson won’t let him). It almost completely lacks the moody atmosphere and tight pacing of the previous two films, The Adventures of Sherlock Holmes and The Hound of the Baskervilles. Universal released eleven more films in this series in four years; thankfully the series gets better.