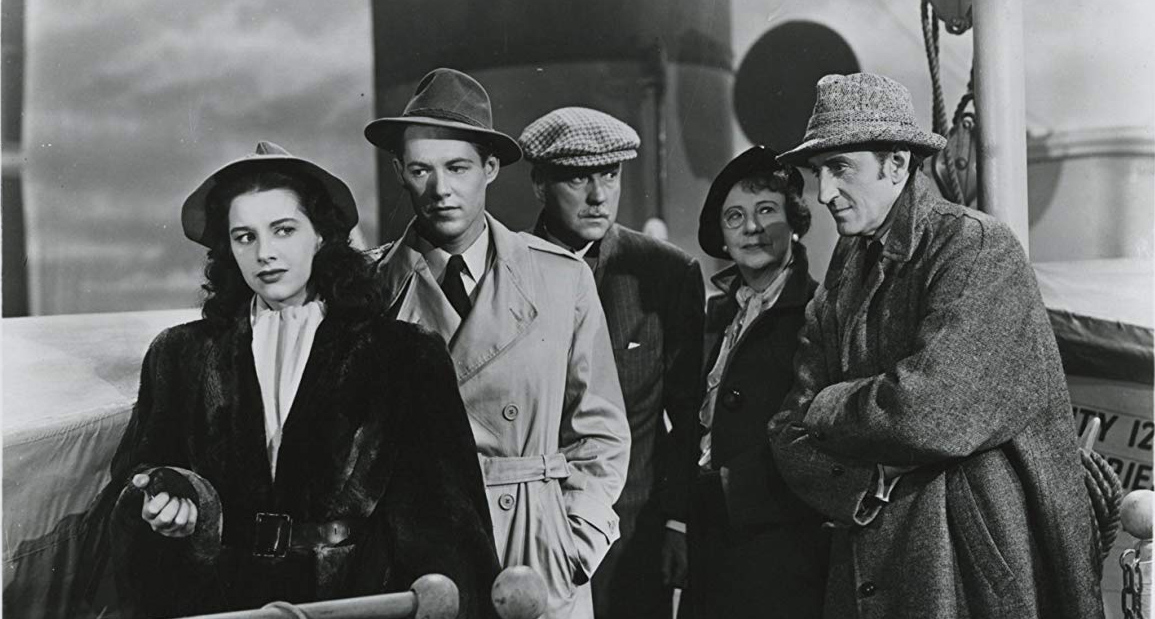 In the worst of the Rathbone/Bruce series of Sherlock Holmes films, Holmes and Watson play nursemaids to a European king on a fraught voyage from England to Algiers, all “in the name of democratic government.” (I’m usure how the death of a figurehead king could really affect a democratic government, and how a country ruled by a non-figurehead king could have much to do with democracy, but that’s unimportant.) The film is marred by glacial pacing, its own silly premise, and a snowballing series of absurdities that eventually blot out the normal enjoyment of seeing Basil Rathbone and Nigel Bruce do their thing.

Although Watson wants to go on a relaxing vacation, Holmes allows himself to be involved in international intrigue once again. The king of a fictional European country has been murdered, and his government wants Holmes to escort the new king (Leslie Vincent) to the safety of Algiers, where loyalists will take him to his throne. Holmes and the king head off in an airplane, while Watson goes aboard a steamer as a distraction. Quickly, though, there’s trouble: the airplane is shot down, and Holmes and the king are apparently dead. A distraught Watson discovers that the pair were never aboard the plane: they’ve been on the steamer all along, and now they have to survive the murderous efforts of a trio of killers until they arrive in Algiers.

The film makes two grave mistakes: keeping Holmes out of the picture for too long, and then introducing him in a rather stupid manner. Aside from the overly clever beginning, when members of the government of a fictional European country enlist him to guard the new king, Holmes is out of the story for the first third of its running time. That leaves Watson as the primary focus, and although he’s a genial enough fellow, he only really works when he’s at Holmes’s side. We’re left with some mild comic relief as he suspiciously eyes the other passengers on the ship and develops a touching crush on the young Sheila (Marjorie Riordan). When Holmes reveals to Watson that he wasn’t killed in the plane crash, the film makes its second misstep: having Holmes and the young Nikolas parade around the ship, drawing attention to themselves. Wouldn’t it have been much better for them to stay concealed? In most films, I’d just accept it with the knowledge that “this is the film about the people who made a rather stupid mistake,” but I can’t really accept it from the master detective Sherlock Holmes. (One way to read it that would make it make sense is to view Holmes as having a death wish, but that’s a darkness that is usually unwelcome in these effervescent films.)

From Holmes’s appearance on the ship, things devolve into an almost sub–James Bond level of silly hijinks. Holmes quickly identifies the people sent to kill Nikolas, but he toys with them flippantly instead of doing anything about them. Even when Mirko (Martin Kosleck) the knife-thrower attempts to skewer him to death in his bed, Holmes merely laughs about his escape and slams the porthole shut. Perhaps he had grounds to call the authorities by this point. (Again, I know this is the movie about the master detective who didn’t call the authorities, but it stretches our patience beyond what’s acceptable.)

There are two fetching instances of self-reference in the film, perhaps signs that screenwriter Leonard Lee wanted to take the franchise into the postmodern (but perhaps not). During a dinner party, as Holmes attempts to figure out how the assassins are going to strike next, Watson is induced to tell a Sherlock Holmes story; readers familiar with the stories will know that Watson is their purported author, so having Watson tell a story within a story that Watson is presumably telling is quite clever. Then, in the last scene, where Holmes would usually give a patriotic speech (that’s gone from this film, as is the exhortation to buy war bonds), instead he pokes fun at Watson’s honest face: “You’d never make a good actor, old boy,” he says. Since Nigel Bruce, playing Watson, is in fact a good actor, one could read this as a meta-comment on the film. Or not.

Nota bene: The Internet Movie Database claims that this film is based on an original story by Sir Arthur Conan Doyle, but that’s misleading. They list a story called “The Return of Sherlock Holmes,” but no such story exists: there’s a collection of Holmes adventures by that title, but none of the stories in it even remotely resembles this plot. However, in one of these stories, Watson mentions in passing “the affair of the steamship Friesland that so nearly cost us both our lives.” He gives no details, and Leonard Lee made the rest up.

The series was clearly limping to a close. Bertrand Millhauser was gone, leaving Leonard Lee and Frank Gruber to split the writing chores on the final films. Only two films followed before Universal pulled the plug, Terror by Night and Dressed to Kill.