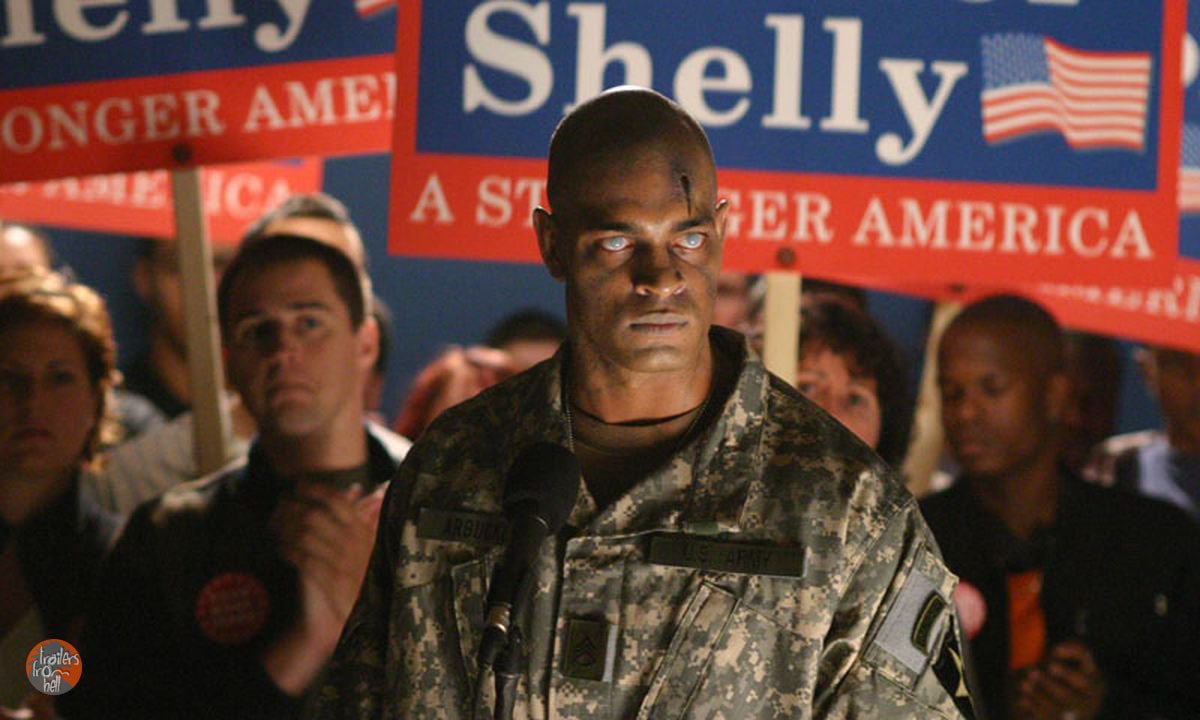 In an appearance on a political talk show, political strategist David Murch (Jon Tenney), while confronting a bereaved mother (a Cindy Sheehan stand-in) whose son died in “the war,” says that he wishes her dead son could come back and tell the world . . . that he was proud to have served his country. Well, he gets his wish when hundreds of dead soldiers rise from their flag-draped coffins, shambling toward the traditional mouthpiece of American citizenship: the voting booth. In Joe Dante’s over-the-top political satire-cum-zombie movie, we get an outspoken and unimpeachable criticism of the Iraq war and the Bush administration. As far as I know, it’s the only mainstream film to deal specifically with the costs of the Iraq war. As Dante said in Turin when the film premiered, “This pitiful zombie movie, this fucking B movie, is the only thing anybody’s done about this issue that’s killed 2,000 Americans and untold numbers of Iraqis? It’s fucking sick.”

I’m not obsessed with politics and pundits enough to know what real-life political whore David Murch is supposed to represent, but the other two main characters are unmistakeable. Jane Cleaver (Thea Gill) is a leather-miniskirted reactionary sexpot explicitly modeled on Ann Coulter, while Kurt Rand (Robert Picardo) is obviously Karl Rove, the spin-meister who runs the show, passing decisions up the pike to “potus” (Bush’s name is never mentioned, but it’s clear that Dante and company understand that the president isn’t the one with the power). At first, the right wingers, symbolized on that same talk show by a Jerry Falwell type and Cleaver, praise the patriotism of the returning soldiers, praise God for blessing the administration in such a way, and guarantee that the dead will retain their rights. The beautiful thing is that the zombies are not your typical brain-munching mindless dead; they’re peaceful protestors, and it becomes clear that all they want is their constitutional right to vote against the president—at which point the right wing turns on them, decrying them as a public menace and locking them up in a Guantanamo-like prison. There’s not a lot of subtlety involved, but listen to the Falwell character’s about-face, where he decrees that the zombies are the judgment of an angry God against our sinful society. One could argue that he’s partly right: lying is a sin, and perhaps letting liars get away with it is judgment-worthy.

Dante bluntly drops his film in the middle of one of the controversies over Bush’s handling of the war: the off-limits coffins of dead American soldiers at Dover Air Force Base. Those zombies bursting out of their coffins, American flags enveloping their outstretched arms and muffling their groans, provide a stunning image that I’d like to see on protest signs—talk about the return of the repressed. The genius of this film is that it literalizes the metaphor: these zombie soldiers aren’t symbols of some larger issue, they’re literally the costs of Bush’s war. The film draws a not-so-subtle comparison to antiwar Vietnam vets when, in flashback, one character’s mother says that her son “came back different.” It also manages to implicate us in the mess: in reminding us of Florida in 2000 and Ohio in 2004, the film is essentially saying that we are the zombies being disenfranchised—we let it happen without much complaining. At least the zombies in this film get a form of revenge, which puts them one step ahead of us.

The film is part of Showtime’s “Masters of Horror” series, in which big-name (and no-name) horror directors were offered a budget and no network interference to create their own one-hour horror film. Dante, whose eccentric career has included gems like The Howling and Gremlins, took their offer and created one of the best films of 2005.