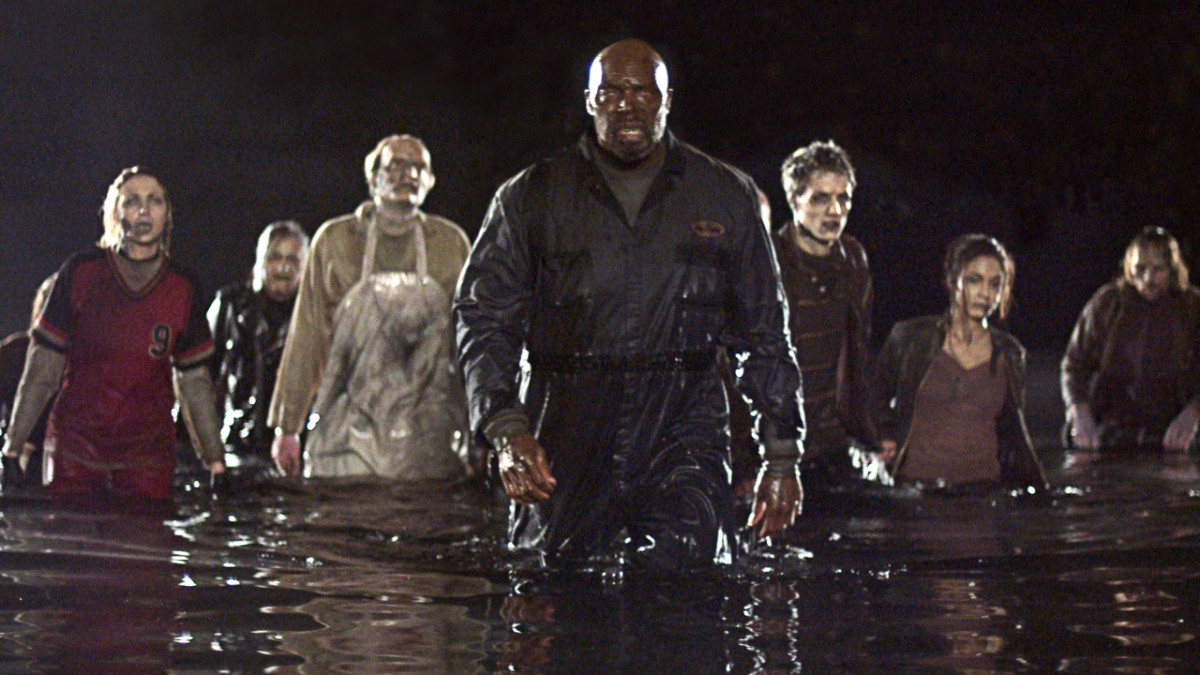 George A. Romero’s zombie films—1968’s Night of the Living Dead, 1978’s Dawn of the Dead, and 1985’s Day of the Dead—have always been about evolution. The dead are coming back to life, so what happens now? The dead seem to be winning, so what happens now? The dead have pretty much overrun the world, so what happens now? Here, there’s a sort of equilibrium: the dead have their world, the rich have staked their place at the top of the new system, and the rest of the people exist uncertainly in between. But Romero doesn’t believe in equilibrium, and the scariest moments in this film have nothing to do with gut-munching and everything to do with evolution, when the zombies don’t behave the way they’re supposed to.

The world is now divided into three levels. At the top are the residents of Fiddler’s Green, a swank apartment building from which Kaufman (Dennis Hopper) rules. It’s incredibly expensive to get in, and there’s a long waiting list. Between the high rise and the zombies outside is a liminal space inhabited by the rest of the survivors, protected from the zombies by water on two sides, an impenetrable barrier on the third, and armed soldiers all around. Kaufman employs roving crews of those soldiers to raid small towns outside the fortress Philadelphia has become, looking for supplies. His head soldier is Riley (Simon Baker), basically a good guy, who plans on heading north to Canada to look for a home far from cities and far from zombies. His chief underling is Cholo (John Leguizamo), an opportunist who brings in illicit booze and cigars, hoping to buy his way into Fiddler’s Green. When Kaufman refuses to let him move in, basically because he’s Hispanic, Cholo goes off the deep end: he hijacks Dead Reckoning, the armored truck the soldiers use for raids, and threatens to turn its guns on the city unless Kaufman pays him millions of dollars—a threat to which Kaufman responds, with brilliant understatement, “We don’t negotiate with terrorists.” Kaufman enlists Riley, his friend/guardian Charlie (Robert Joy), and a discarded prostitute named Slack (Asia Argento, daughter of that other aging master of horror, Dario) to retrieve Dead Reckoning in exchange for free passage.

Outside the fence, the zombies aren’t the same as they were. More of them seem to be half-heartedly manipulating tools—one jazz quartet gets a few chuckles—and they seem to be less aimless than in the previous films. Romero’s most important characters have always been black men, and the pivotal character here is a zombie named Big Daddy (Eugene Clark), who spearheads the evolution that Romero is interested in. He can think, at least a little; he can organize, and he stares at Fiddler’s Green, rising in the distance like a lighthouse, and he knows that he wants in, if not for the usual reasons. When he seems to summon the other zombies to his side, when he refuses to watch the fireworks, when he picks up the gun, when he steps into the river—he’s the great leap forward for zombiedom. There’s a subversive humor inherent in his character, typical of Romero: in the old world, Big Daddy pumped gas, but in the new world, he leads armies. It’s all about progress. Of a sort.

While this isn’t necessarily a criticism, this one is a lot more action-oriented than the previous outings; someone pointed out that it resembles a John Carpenter film in that respect, and—especially with the addition of Dead Reckoning—that sounds about right. Romero has never really been about action, but about suspense, and this was far less atmospheric than the previous outings. There are genuinely creepy and atmospheric moments, such as when the zombies rise from the river, but it’s more about shock cuts and loud noises this time around. But what always worked, and what still works, in Romero’s zombie flicks is their depth. You could read this film as a commentary on gated communities and racism—why won’t Kaufman let Cholo move in? and can’t the Green, with its private troops, be equated with the housing developments with private guards and unspoken agreements to keep minorities out? Or it might be about terrorism, or immigration. So Fiddler’s Green is a gated community, or even the G8 nations; the poor clustered at the foot of the tower are the rest of us, scrabbling for crumbs and telling ourselves how good we have it; and the zombies are developing nations, some trying to get a piece of the pie and others trying to destroy the pie.

And there are even more subtle nudges. Is it any accident that the logo for Fiddler’s Green looks a lot like Enron’s? Or even the name “Fiddler’s Green”… am I the only person who immediately thought of the old saw “Nero fiddled while Rome burned”? That’s basically what everyone in the Green is doing—they’re pretending that it isn’t hell on earth outside, right up until it starts pounding on the door. That, in fact, produces one of the funniest and most savagely accurate lines in the movie. Kaufman, in what is basically an aside, shudders and says, “Zombies, man. They creep me out.” You’re saying, “well, yeah, of course,” but that breathtaking understatement speaks volumes. High in his tower, cut off from having to deal with the zombies, Kaufman doesn’t really even think about them. They’re an abstraction, something that pops up in the news once in a while, and Kaufman’s statement is the kind of thing a De Beers board member might say when he reads about violent protests over diamond mining in Botswana. I think Romero is making a cogent statement about the rich and their determined refusal to think about those less fortunate.

There are some niggling logical flaws that bothered me. Foremost among them is the continued importance of money. What, exactly, is a dollar bill worth in a world when you have to get supplies by shooting your way through throngs of shambling dead? It would seem that in what is basically a post-apocalyptic world, things of more immediate use, like gas or bullets or canned goods, would be legal tender; whatever passed for an economic system would be a barter system, sometimes conducted at the point of a gun. I suppose one could argue (as I will here) that it’s all up to the guy in charge. Kaufman is in such complete control of everything that he has decided that money is still the legal currency; because he controls supplies and the military, he can decree that people have to keep using cash if they want to eat. However, even that tenuous argument falls apart when both Cholo and Kaufman attempt to carry large amounts of money away from the city. Outside of his sphere of influence, what good would $100 bills be, except as fuel for campfires? And the timeframe of the film is too short: the rapid evolution of the zombies from staggering corpses into a more or less organized force over the course of one evening is too much to accept.