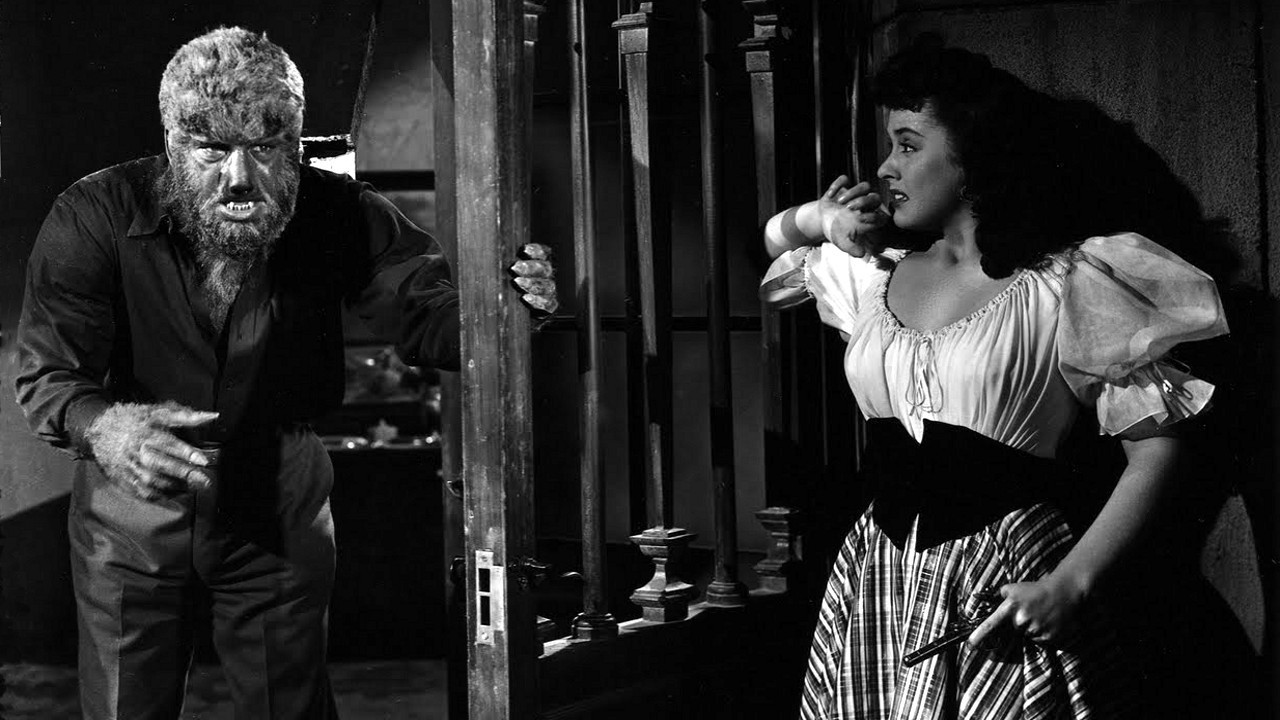 This time around it’s the mad Dr. Niemann (Boris Karloff, returning to the series), a madman who was imprisoned for attempting to put a human brain into a dog’s body—but why would he want to do that? He and his kindly murdering hunchback sidekick Daniel (J. Carrol Naish) escape from prison and quickly take over Professor Lampini’s Traveling Horror Show, which boasts the skeleton of Dracula. As quick as you can say “I never drink… wine,” Dracula (John Carradine) is up and around; he has his eyes set on the beautiful Rita (Anne Gwynne); and he’s toast by 27:39 of the film.

Let’s start there. Carradine is an entirely silly Dracula. There’s no menace—not that Bela Lugosi was all that menacing in the original Dracula. But he had presence, and a vaguely corrupt Eastern European charm. Carradine just looks surprised most of the time. The manner in which they bring him back is bad enough; you just have to remove the stake from his skeleton, which looks like it might fall out with a hearty bump anyway. Niemann puts him to work offing the men who imprisoned him fifteen years earlier; Dracula only gets through one, in a really bad silhouette scene where a plastic vampire bat flaps around the old man’s head.

So half of the film is gone, and so is Dracula. Now Niemann and Daniel head for Visaria, the town near Frankenstein where at least one of the sequels took place. Daniel falls for a gypsy girl (Elena Verdugo) in a highly unnecessary dance scene. She’s repulsed by his hunchback, but she pretends to like him until someone more handsome comes along. That would be Larry Talbot (Lon Chaney Jr.), the Wolf Man, who was imprisoned in yet another glacial cave after the anticlimactic fight scene at the end of Frankenstein Meets the Wolf Man, alongside the Monster, this time around played by Glenn Strange. Niemann wants to give the Monster a new brain, and perhaps give Talbot a new brain. The film’s not really clear on that, what with all the evil double-crossing going on. Cue the angry mob of villagers, and you have yet another ambiguous ending.

I can’t even begin to list all the inconsistencies, both plotwise and logic-wise, in this film and in relation to the others in the series. One fascinating one, though, is the relationship between brain and self. There’s real disagreement among the films in this series about whether one’s essence, one’s soul, one’s “self,” is contained within the brain or not. In Ghost, it’s pretty clear that the brain is the site of the self, and that transplanting a brain to another body transplants the personality and the memories as well. Here, though, Niemann doesn’t even seem to know. He promises Daniel a new body, but it would be Daniel’s mind inhabiting the body; therefore, the self and the brain are the same thing. However, he initially promises Talbot that he will give him a new, undiseased brain, which will supposedly cure the werewolf’s curse. That would imply that it would still be Talbot, even with a new brain. This question is really the only interesting thing about the film. The series was really testing the patience of audience members by now, and it’s amazing to me that they still managed to put out two more sequels—although bringing in Abbott and Costello sounds like a fitting conclusion to the nonsense.