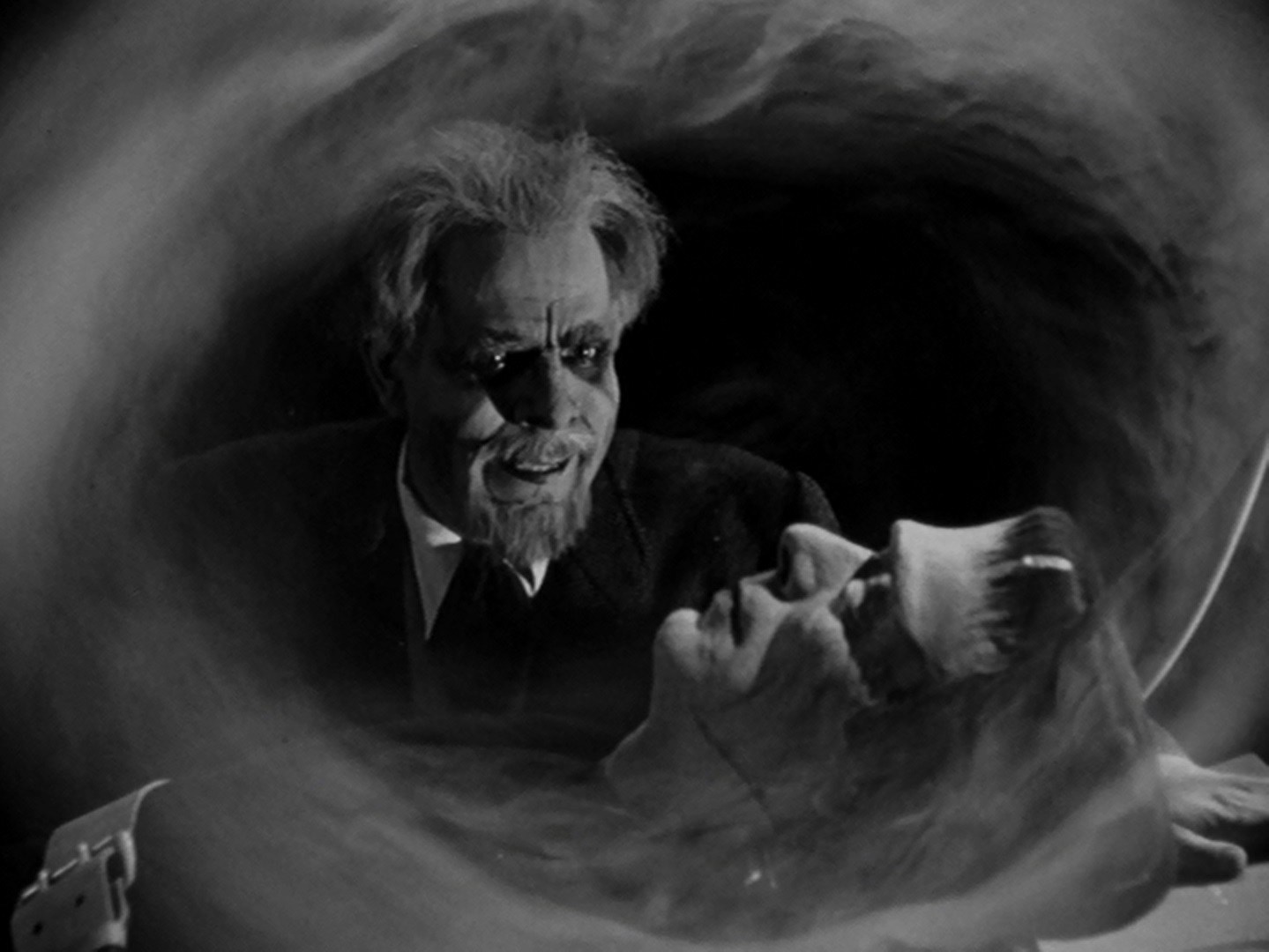 This is an odd entry in the long-running and increasingly inbred series of horror films Universal put out starting with Dracula in 1931. It’s actually mistitled: it should be called House of Frankenstein (although that title was already taken the year before), because its emphasis is entirely on the science-fiction aspects of the mythology, not the horror aspects that are implied by the presence of Dracula in the title. There’s no mystery here, no suspense or atmosphere; it’s all glands and hormones, pressure on the brain, medical explanations, engineering and pulleys and spark-emitting machinery.

This time around, Dracula (John Carradine, a little better here than in House of Frankenstein) arrives unannounced at the home of Dr. Edelman (Onslow Stevens), in search of a cure for his vampirism. He’s calling himself Baron Latos, but I’m not sure why, since he reveals his true identity to Edelman before the end of the first scene. Edelman experiments with blood transfusions, thinking that vampirism is in fact caused by a kind of blood parasite. Soon thereafter, Larry Talbot (Lon Chaney Jr., sporting a silly little mustache) arrives seeking the same kind of help. He believes that Edelman’s methods, which involve some kind of spores that make bone malleable, will help him; it turns out that his lycanthropy is caused by pressure on the brain. As an afterthought, while rooting through caves beneath the house, Edelman and company stumble upon the preserved and undying body of Frankenstein’s monster.

Edelman decides to bring the monster back to.. well, not life, since the monster can’t die, but at least animation, asking “can men sit in judgment over life and death?” It must be a rhetorical question, since that’s exactly what he’s doing by bringing the monster, with all the mayhem and murder he’s likely to cause, back into society. But the monster isn’t the good doctor’s main concern. It turns out that Dracula was fibbing: he didn’t really want a cure, he just wanted to get closer to Edelman’s beautiful nurse Miliza (Martha O’Driscoll). Edelman gets upset and does away with Dracula—or does he?—but Dracula gets his revenge when those ill-conceived blood transfusions turn Edelman into… well, not exactly a vampire, although there’s a nice scene where he watches his reflection in a mirror as it fades away to nothing. More like a garden-variety madman, although one more along the lines of Talbot’s werewolf: he has spells where he’s a kindly old doctor, and spells where he strangles the help. This cues the obligatory angry torch-wielding mob, and, well, you know the rest.

So the continuity problems are front and center. Dracula got staked halfway through House, so what is he doing here? (Let’s ignore the fact that his corpse was burned up in Dracula’s Daughter.) Frankenstein’s monster and the wolf man ended up going down with the castle in House, and the monster is discovered underneath Edelman’s house, so (1) how did Talbot escape, and (2) how did he somehow fail to notice that Edelman’s house is in the same neighborhood, even the same block, as that fateful castle? Instead of being an annoyance, though, these happy rewritings of the canon are a source of amusement: those viewers who have seen all of the earlier films get to chuckle about the changes, while viewers who are new to the films won’t know any better.

Amid all the silliness of these later films, there’s usually one flawless scene, and this film is no different. Dracula, attempting to seduce Miliza, comes upon her as she’s playing Beethoven’s “Moonlight Sonata,” the saddest music in the world, on a piano. He hypnotizes her, causing the Beethoven to mutate into something disturbing and dissonant. It’s a great touch, and it’s just about the only place where genuine, creepy atmosphere pushes its way into the film. Finally, there’s one memorable performance, but it’s more because of the actor’s appearance than anything: Skelton Knaggs, who plays a village man whose brother is murdered by Edelman during one of his fits, is one creepy-looking guy, the product of either unfortunate genetics or a master makeup artist, and his spacey, wide-eyed, eerily calm delivery of the lines that turn the villagers into a lynch mob is the acting highlight of the film.