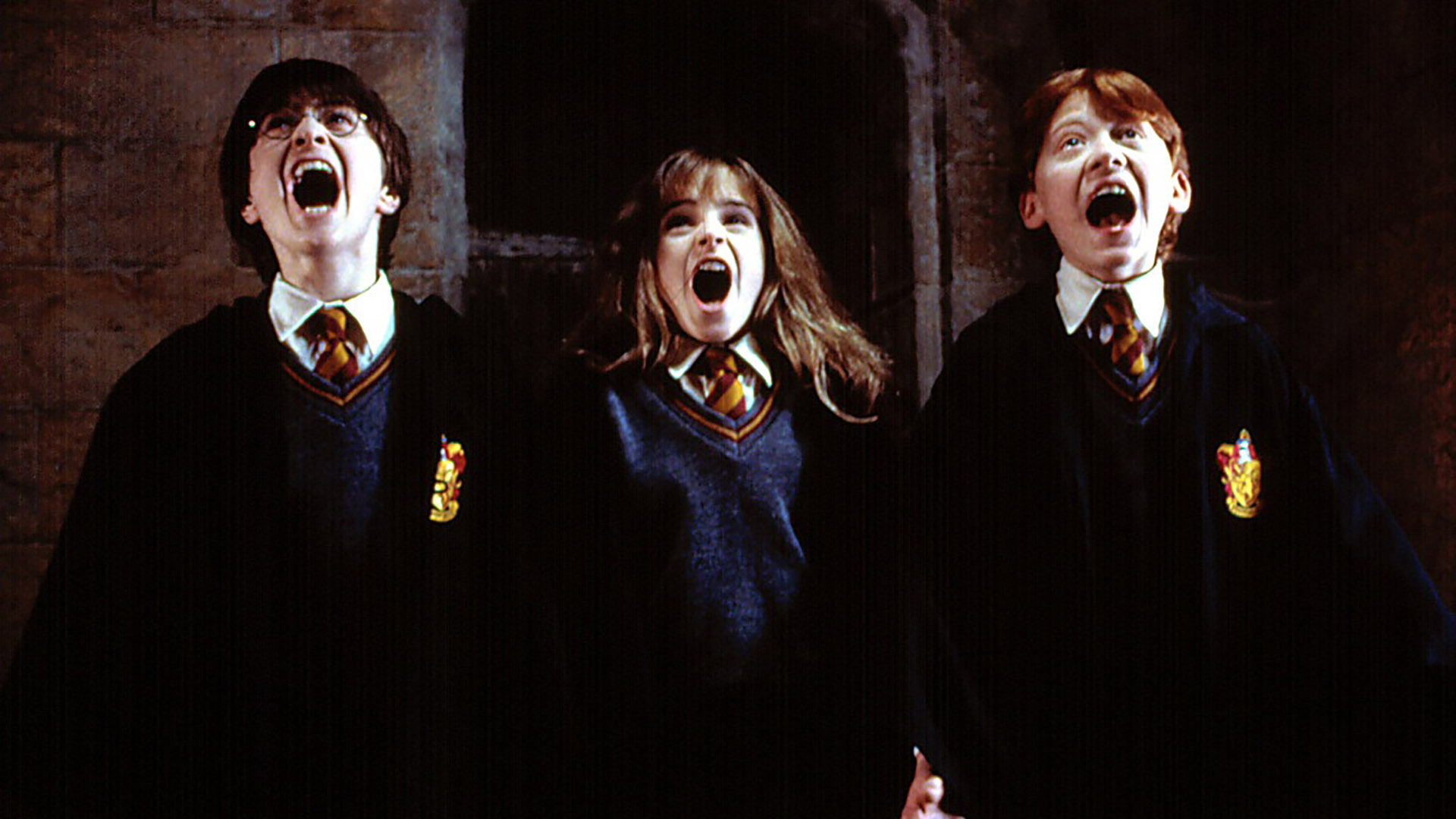 I sat watching the first installment of the Harry Potter franchise, mildly entertained but nagged by something that I couldn’t figure out until nearly an hour into the film: I had already seen it, and it was better the first time. I had seen it in my head, one day just before the film was originally released in 2001; I was home sick from work, and I read a large chunk of it while soaking in a bath, and finished the rest later that day. The pages flew by, and I literally couldn’t put it down. There’s something about the experience of reading a really exciting page-turner that a film version, especially such a concertedly faithful adaptation as this one, can’t reproduce. It’s a Xerox copy of the book, and a copy is never as good as the original.

I am not one of those people who hates movies that change books; in fact, I rather enjoy it when books I enjoy are made into movies that I enjoy for completely different reasons. Literature and film are two radically different media; things that work on the page may not work as well in the harsh “reality” of a more visual medium. The essential thing when adapting a beloved book is to capture the essence of what made the book great. Attempting to reproduce visually everything that happens in a book is not a good way of capturing that essence—sometimes, you lose the feel when you worry too much about the look.

For the five or six of you who don’t at least know the story, Harry Potter (Daniel Radcliffe) is the son of wizards who were killed by Voldemort, an evil sorcerer whose lust for power led him to kill off everyone who opposed him. He succeeded, but when he tried to kill the infant Harry, he was seemingly destroyed, the boy untouched save for a lightning-shaped scar on his forehead. He was left with his Muggle relatives (Muggles are regular people, non-wizards) the Dursleys, who are crude, selfish, and devoutly anti-magic. We catch up with Harry as he is living in the hell of suburban London, sleeping in a closet beneath the stairs while his fat cousin Dudley gets all the attention. He gets his first inkling of his magical abilities at the zoo in a funny scene that ends with Dudley trapped in the snake cage. Suddenly, letters start to arrive for him from Hogwarts Academy, the leading school for sorcerers. Despite his ornery relatives’ efforts, he is taken away by Hagrid (Robbie Coltrane), the groundskeeper for Hogwart’s. He is introduced to his heritage as both a wizard and a hero; everyone in the magical world knows his name.

At Hogwart’s, he meets the core characters who will populate the novels and the films based on them. There is Ron Weasley (Rupert Grint), a poor kid with bright red hair with whom Harry quickly makes friends; Hermione (Emma Watson), a know-it-all who nonetheless befriends the two boys; and Draco Malfoy (Tom Felton), a pretty boy with a mean streak who wants to learn magic for the power he can gain from it. There are also the professors: Dumbledore (the late great Richard Harris), who runs the school and feels protective toward Harry; Snape (Alan Rickman), the head of the Slytherin house who takes an instant dislike for Harry; Quirrell (Ian Hart), a stuttering nervous wreck; and McGonagall (Maggie Smith), whose hard demeanor masks a protective streak. Harry is quickly acculturated to the world of Hogwart’s: he learns spells and potions, discovers that he is a gifted wizard who is good at practically everything, and manages to get into trouble on a nearly daily basis. He and his friends stumble onto a mystery that involves a stone that gives eternal life, a creature that kills unicorns, a mirror that shows you what you think you want, and a mysterious trap door that guards something important enough to be watched over by Fluffy, a Cerberus-like three-headed monster.

Of the characters, the child actors, many of them first-timers, acquitted themselves well; indeed, they looked and talked much like I imagined them. My favorite character was Hagrid, the shambling buffoon who always says more than he should; I found myself laughing and smiling every time he came onscreen. Alan Rickman was suitably snarling and evil as Snape, while Richard Harris created a majestic and kindly Dumbledore.

I had some problems with the special effects. A lot of them weren’t very good. Actually, I suppose they were very good, but they were too perfect, too clear: they stood out from the background as effects, not as seamlessly integrated parts of the magical world the filmmakers were trying to recreate. I was especially disappointed by the troll that attacks Hermione and the Quidditch game, which was one of the best sequences in the book because, in your imagination, the rules of gravity and space don’t apply. Something about seeing it enacted by real people made it seem a lot like Christopher Reeve, arm extended, “flying” against a blue screen as Superman. I reserve special enmity for the Oscar-nominated score by John Williams; it was everywhere, getting in the way, trying to make us feel a certain way, wall to wall, whenever nobody was talking. It was excessive, a good example of what’s wrong with a lot of movie music.

I suppose that’s the essential complaint I had with the movie. It tried so hard to be faithful to the book, to recreate exactly every character, every event, every nuance, that it shot itself in the foot because it is impossible to trump the images that readers, at least this one, get in their heads when they’re reading a good book. In the book, during the exciting scenes, the pages flew by, as I rushed to see what was going to happen next. You can’t do that onscreen; director Chris Columbus could only show what was there in real time, which often seemed too slow and stately. I wonder what a more imaginative director, such as Tim Burton or Terry Gilliam, might have done with the material.