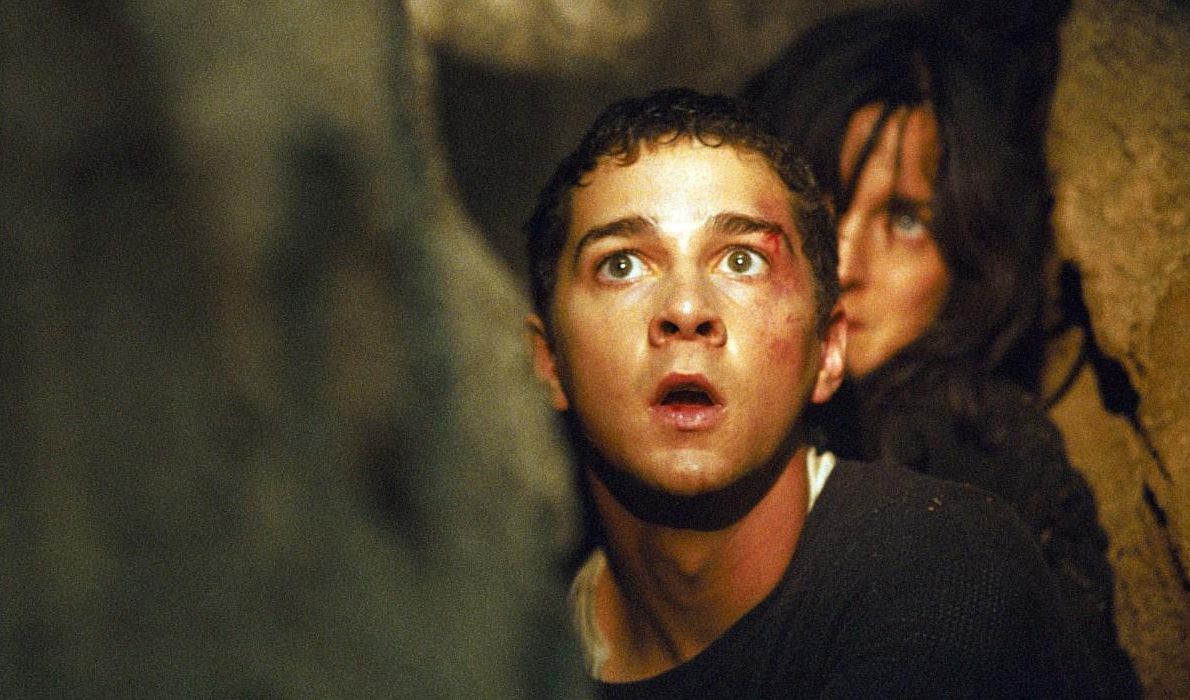 The great American pastime of snooping on one’s neighbors gets a high-tech DIY upgrade in Disturbia, and it’s about time. Hearkening back to the 1950s and Rear Window, Alfred Hitchcock’s paean to aiming telescopes not at the stars, but at the bedroom window of the house across the street, this film rephrases Tom Waits’s immortal question, “what’s he building in there?” as “who’s he killing in there?” The end result is a surprisingly enjoyable film, efficiently made and featuring a strong young cast and some clever references to its cinematic forefathers. The most obvious influence is the aforementioned Rear Window, but to call it a “remake” is to miss the more contemporary influence of Tom Holland’s brilliant 1985 scarefest Fright Night, which is one of the best vampire movies ever made (and which itself owes a lot to Hitchcock’s film). The premise—a guy stuck in his house thinks his neighbor is a murderer—is straight out of the Hitchcock film, but the details are borrowed heavily from the Holland film.

A year after his father’s tragic death in a horrific opening-scene car accident, sullen Kale (Shia LaBeouf) punches his Spanish teacher (one might argue that the teacher deserved it, but it’s probably not a good idea to act on these impulses) and is sentenced to house arrest. He can’t go farther than 100 feet from the kitchen, where the transmitter is located, and after his mom (Carrie-Anne Moss, looking sad to be so far from Trinity) cuts off his Xbox and iTunes accounts, his world is as constrained as James Stewart’s was in Rear Window. But he’s got the advantage of living in the early 21st century, so he has dozens of technological gewgaws that help him spy on his neighbors, including videocameras with night-vision lenses and fancy binoculars. One neighbor cheats on his wife with the maid; a trio of preadolescents play ding-dong-ditch and watch porn when their mom isn’t around; his pretty new neighbor Ashley (Sarah Roemer) undresses with the lights on and her shades up; and his quiet neighbor Turner (David Morse) just might be a serial killer. Of course, nobody will believe him, so Kale, his annoying sidekick Ronnie (Aaron Yoo), and Ashley decide to do some investigating of their own, eventually establishing that Turner is not just a serial killer, he’s a serial killer who knows they’ve been watching. Cue the Bernard Hermann-influenced horror-movie music.

A lot of the film’s success is due to Shia LaBeouf, who used to be a potentially great actor. He’s got loads of affable, stammery charm, which director D.J. Caruso smartly lets him display; he’s best in a scene where he has to explain to Ashley that his pseudo-stalking behavior is in fact charming and kiss-worthy, a point she acknowledges when she observes that he’s either incredibly sweet or incredibly creepy (but why can’t he be both?). If there’s one thing he can’t sell, it’s the MO: he’s supposed to turn to voyeurism out of desperated boredom, but he seems too well-adjusted to convince us. Thankfully the film mostly eschews clunky psychological motivations. The cast’s biggest letdown is David Morse as Turner, the friendly neighborhood serial killer. Maybe it’s because I was stuck on the Fright Night comparisons, but he just didn’t bring the necessary levels of charm and dangerous attractiveness. Because I was comparing him to Chris Sarandon, who was never again as good as he was as the bisexual vampire Jerry Dandridge, Morse just wasn’t convincing. He’s imposing, yes, and he manages to ramp up the creepiness during the scene when he obliquely threatens Ashley, but for the most part he’s just a stock baddie, his menace depending on the ominous soundtrack more than on anything in him.

Let me expound on my Fright Night theory. Both main characters have an annoying sidekick and a pretty girlfriend who’s menaced by the bad guy. The murderer is a serial killer whom the protagonist links to a series of disappearances. There’s a scene where the sidekick pretends to be dead to frighten the main character; later, the sidekick is the first one of the trio the bad guy attacks. There’s an ominous visit by the murderer to flirt with the main character’s mother; the dialogue even sounded the same, although it’s been a while since I saw Fright Night. The protagonist’s concrete proof comes as an unwelcome interruption to a makeout session with his girlfriend. Maybe I should make a table comparing the influences. Maybe you should run out and rent the film.

Cinematic progenitors aside, Disturbia is a smart, efficient little thriller that wears its heredity proudly; I was especially charmed by Geoff Zanelli’s score, which inserts clever shades of Bernard Hermann compositions into the scary scenes—I couldn’t identify specific influences, but the feel was spot-on. The film fades a bit toward the end into overly excitable horror-movie tropes and an emphasis on gore that was absent during the rest of the film, and Morse proves unable to rise above the inexorable laws of cinema that force him to stalk around, stonefaced, with a butcher knife. Still, for most of its running time it was a solid entry in the genre.