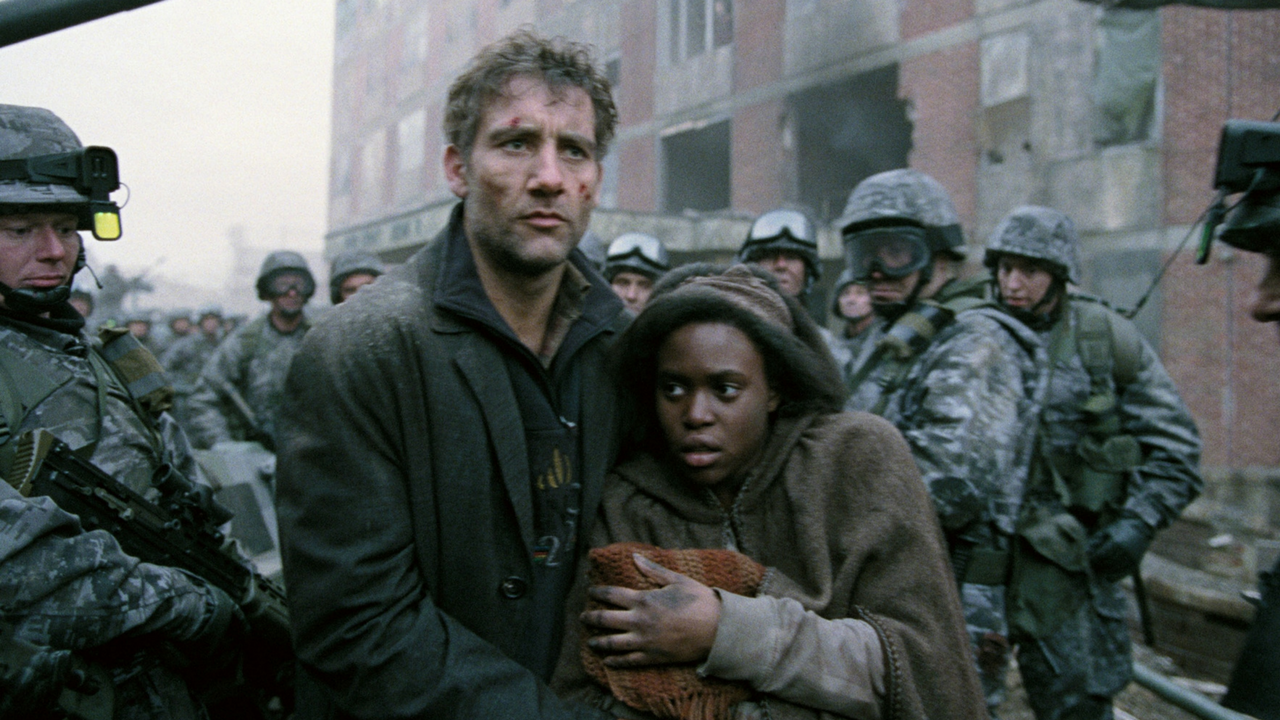 Every day, Children of Men looks not only more possible, but more probable, at least in its vision of a future that has its roots in the present. But Alfonso Cuaron’s chilling vision of the future goes one step beyond those things we can already see growing today; it’s 2027, and it’s been 18 years since the last human gave birth. It’s a hell of a setup, and for the most part Cuaron and company deliver on that promise.

Although the cast features such names as Clive Owen and Julianne Moore, the main attraction is Cuaron’s direction, favoring restless handheld cameras and amazing, nearly impossibly choreographed tracking shots. Cuaron’s genius for movement is one of the things that made Y Tu Mama Tambien so entrancing, and the main thing that made Harry Potter and the Prisoner of Azkaban so much more watchable than the first two installments. He has a knack for rushing things along without making them feel rushed; we feel swept along with the narrative or within a scene without feeling out of control. The highlights are surely the magnificent tracking shots, especially the ones in the film-closing sequence in the refugee camps, where Cuaron’s camera takes us through battles in progress, the lens becoming spattered with blood in the controlled mayhem.

On the day of the death of the youngest person in the world, Theo (Owen) is kidnapped by the Fish, a revolutionary group headed by his ex-wife Julian (Moore), who wants Theo to use his connections to secure safe passage to the coast for a young refugee named Kee (Claire-Hope Ashitey). After Julian is killing by a seemingly random attack by thugs, co-leader Luke (Chiwetel Ejiofor) and the matronly Miriam (Pam Ferris) take Theo and Kee to a Fish hideout, where Theo learns that Kee is pregnant and that Luke has his own plans for the baby that don’t necessarily include leaving it with Kee. Theo, Kee, and Miriam flee in hopes that they can get Kee and her unborn child to the Human Project (a shadowy sort of leftist collective), with Luke and the rest of the Fish in hot pursuit. Along they way they seek aid from Theo’s friend Jasper (Michael Caine) and a corrupt and probably insane cop named Syd (Peter Mullan), until they end up in a walled-in refugee city, caught in the middle of a battle between the army and the revolutionaries.

Owen is the classic anti-hero, the reluctant savior whose gruff and resigned exterior conceals a big heart. Up until the very end, his heroics are of the decidedly average kind; he’s presented as being able to help not because he’s particularly adept, but because he’s lucky. But then he’s shot, and unlike every single other character in the film who is shot (they all drop, well, like they’ve been shot), he’s able to persevere to the end, apparently unmindful of a hole in his stomach until his sacred duty is performed. It’s one of the film’s few lapses of internal logic. Another comes during the attack in which Julian is killed; we learn later that one of the Fish used the attack as cover to assassinate Julian, which seems more than foolhardy—they knew Kee was in the car, and with all the shooting and fire-bombing, weren’t they worried that maybe she or her baby would be harmed? But for the most part the film is well constructed and acted; its limitations are apparent on a different level. It’s a very good film, but there are many things about it that keep me from joining in the ecstatic praise that has greeted it.

Although the film’s politics are mostly in the right place, there’s ample room to criticize many of its underlying assumptions. A scholar friend sighed, saying that Children of Men seemed like the story of a white man saving a brown baby from the government, a sort of white man’s burden for the left. There’s something to that, and although I don’t think it was intentional, it’s obvious that Cuaron and company didn’t think it through. And I’ll add to that by pointing out that it’s not just about a white man saving a brown baby, but about a white man saving a brown baby from, among others, a brown man. I’m only halfheartedly advancing this theory; I don’t for a minute think that Cuaron and company meant any of this. I’d like to believe that the principle of colorblind casting was at work here: that Chiwetel Ejiofor is such a marvelous actor, and the role of Luke such a rich role, that they deserved to go together. I don’t think Cuaron and company considered any alternate readings, which is a disappointment from a film that’s so smart about other things.

It fails again in its sexual politics. There’s a kind of casual and distressingly typical misogyny at work. Women are the root cause of the infertility (of course men wouldn’t have become infertile). There are only three types of women here, the helpless, the nurturers, and the ones who end up dead. And then there’s that word in the title, “men,” which I’m sure we’re supposed to read in a more universal “all mankind” way, but which is actually a good description of the film’s attitude about women. The entire film is about men fighting over a woman’s child: over its existence, over its meaning, even over its sex. One of the finest moments comes when Ejiofor, spouting off about how important “he” will be, falls into dumbfounded silence when he learns that the baby is a girl; his face relaxes from anger to wonder, and he says, “A girl? I had a sister.” But in the end, it’s really about the children of men, and women don’t factor in except as carriers of those children. (And I’m coming around to another friend’s notion that the song over the end credits, “Running the World” by Jarvis Cocker, is another example of the filmmakers failing to think things through. The chorus, “the cunts are still running the world,” initially seemed to me to be a sort of wry admission that, even if the ending is a happy one, its happiness is muted by the fact that the government is still engaged in its slash-and-burn policies, and that maybe things won’t be any better if the Human Project wins out. But there’s that word, “cunt,” which was probably intended as a tossed-off British slang term devoid of sexual connotations, but given the weight of the film’s sexual politics, is simply an unconscionable gaffe.)

And then there’s the utopian ending, which, although it worked for me sitting there in the theater—indeed, I would have been furious had it ended any other way—now strikes me as naive. Maybe the film’s desperate hope for a better world clouded its filmmakers’ vision, a reading that’s perfectly compatible with the resolution. Throughout, Owen is protecting the baby against the oppressive government, which would misuse the baby as a symbol, and the revolutionaries, who also want to misuse the baby as a symbol (they even call her a “flag,” something to rally behind). I’d love to agree with the film’s utopian hope that the members of the Human Project will be above such things, that “society’s greatest minds” won’t use the mother as a lab rat, that they wouldn’t dream of separating the baby from her mother, but the entire history of scientific research advises against such hopes. I didn’t think so at the time, but maybe the film would have ended better with Owen and the mother waiting in the fog for a boat that might never come. Uncertainty strikes me as a more honest ending to this story than does blind hope.

Note that I wrote this shortly after seeing the film in the theater on its opening weekend. In the years since then, over repeated viewings, it has grown in my estimation, and I think it’s one of the great films of the 21st century.