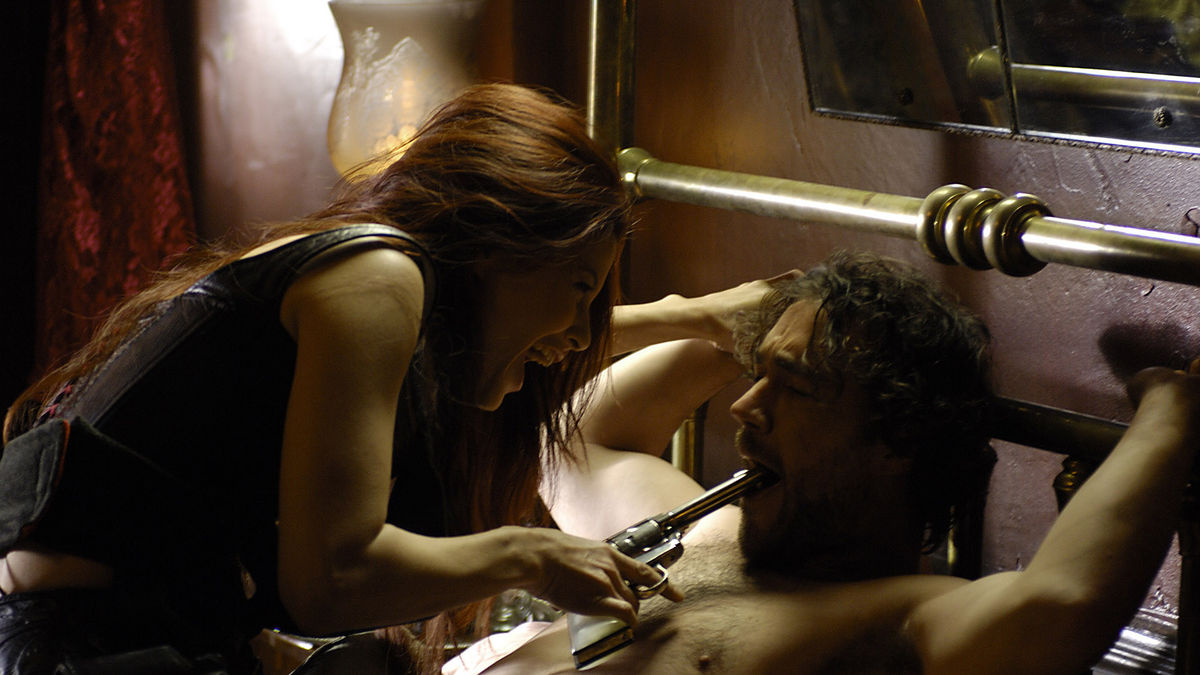 Instead of a simple angry rant about Uwe Boll’s BloodRayne 2: Deliverance, which is about a half-vampire fighting against a vampiric Billy the Kid in the Wild West, I wrote poems: one sonnet (Shakespearean, not Italian), two limericks, a villanelle, and a sestina.

Shall I Compare Thee to an Uwe Boll Film?

The vampire outlaw William Bonney wreaks
a trail of carnage spread across the West
(but of his Slavic accent we’ll not speak).
But he’s just BloodRayne 2‘s especial guest:
Natassia Malthe is the “dhamphir” Rayne;
be-sworded, bosomed, clad in leather cloak,
she’s out for vengeance, dealing death and pain
to Bill the Kid and his undead cowpokes.
Director Uwe Boll is widely booed:
“incompetent”? Inadequately cruel.
Anachronism reigns! Ineptitude
of acting, scripting, lensing is the rule.
This film’s a minor cinematic crime
entirely unworthy of my rhymes.

The Lass from Oslo

There once was an actress named Malthe.
In BloodRayne her presence is paltry.
Her waist is quite slim
but her acting is grim
and quite limited her career shall be.

She’s entirely too soft-spoken.
She pales next to Kristanna Lokken.
She’s not half as pretty,
her accent is shitty,
and her ass-kicking skills appear broken.

Do Not Go Gentle Into an Uwe Boll Film

My eyes! God damn that Uwe Boll to hell
for bringing forth another BloodRayne flick!
Such horrors from my mind I can’t dispel!

I’d rather choose to face armed personnel,
or Montresor to wall me up with bricks.
My eyes! God damn that Uwe Boll to hell!

Each line the actors speak is a death knell;
the overacting hams lay it on thick.
Such horrors from my mind I can’t dispel.

Film art is absent, vision, skill as well;
technique’s the very opposite of slick.
My eyes! God damn that Uwe Boll to hell!

I’d vote to give this film a Prix Nobel
but there’s no prize for cinematic ick.
Such horrors from my mind I can’t dispel!

At nothing does the cast or crew excel.
Just watching left me feeling vaguely sick.
My eyes! God damn that Uwe Boll to hell!
Such horrors from my mind I can’t dispel!

You’ll say I’m too hard on this movie
and perhaps you’re right.
It’s not, after all, trying to be great cinema;
it’s just a straight-to-video sequel
that appeals to a certain collection
of people who will excuse its flaws.

But should they excuse those flaws?
Did they? It’s in the bottom 100 movies
on the IMDB, an illustrious collection,
and while I’m not sure its placement there is right,
it’s certainly a pointless and unskilled sequel
to a film that was itself a blight on the cinema.

(I don’t understand the subset of cinema
that’s “supposed to be bad”; if the flaws
of this BloodRayne sequel
are intentional, why is the movie
not funny? Because comedy is the only right
venue for intentional gaffes; this collection

of gaffes is unfunny.) So is a growing collection
of BloodRayne films inevitable, then? Will the cinema,
or at least home video, support Uwe Boll’s right
(backed up by his fists) to slather his directorial flaws
on the screen in another half-dressed half-vampire movie?
Can he find a distributor for another sequel?

What a stupid question. Another sequel
likely featuring Malthe and a collection
of has-beens will bore and annoy movie
audiences in 2009. I’m sure the cinema
will survive; it’s survived more disastrous flaws
than Uwe Boll can perpetrate. That’s right:

Uwe Boll is harmless. People in their right
minds ignore him. Real damage comes from mindless sequels
bolstered by kadillion-dollar budgets and a flawed,
strictly commercial mindset. The collected
films of Brett Ratner, Michael Bay, et al. do more harm to the cinema
because studios hold up as triumphs their shitbag movies.

So let Uwe Boll make movies. Let him do a hundred BloodRayne sequels.
It’s his right (plus he’ll beat you up if you argue). Cinema’s
real enemies perpetrate worse flaws. Michael Bay is in the Criterion Collection.