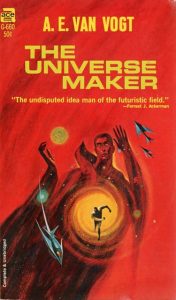 Canadian author A.E. van Vogt (1912-2000) wrote more than thirty novels and countless short stories. A popular writer of science fiction’s postwar publishing boom, he was and remains a divisive figure for the slapdash nature of his writing and his politics. He had some famous friends, though: both Philip K. Dick and Harlan Ellison called him an inspiration and influence, a writer who managed to inject deep thoughts into traditional space opera. I may have chosen the wrong novel to start with; earlier works such as The World of Null-A (serialized in 1945 and published in book form in 1948) and Slan (1940/1946) tend to be better reviewed. But here we are.
The plot is nearly impossible to summarize without sounding batty. Morton Cargill, a 1950s soldier, kills a woman in a drunk driving accident. He’s kidnapped into the future by a highly technological society known as the Tweeners, who plan to murder him to help cure the psyche of a descendant of the woman he killed. He’s rescued by the Floaters, a population of airship-dwelling drifters, with the help of a Shadow, a sort of meta-human who can become incorporeal and walk through walls. In the course of a slim 127 pages, he foments rebellion among the Floaters, leads the Tweener military, creates an underground revolutionary army among them, zips to the 72nd century and back, learns the secrets of the Shadows, and perhaps discovers the powers of the immortal, physical soul.
By the 24th century, the population of the United States has dropped precipitously, but instead of a nuclear war or environmental disaster, it came about from people rebelling against the strictures of society by walking away from it–or floating away from it in slow-moving airships. Thus these Floaters brought about the downfall of society by refusing to be cogs in the machine of capitalism. Their enemies, the Tweeners, live in cities and want to re-establish capitalism so the world can hum along the way it used to. The Shadows’ motives are mysterious at first, but they turn out to represent the next phase of evolution of humanity. Sort of.
Partly because of the requirements of the pulp publishing industry, most sci-fi novels of this era are short, under 200 pages, but the number of concepts isn’t significantly lower than you’d find in a modern novel of 400 pages. Thus they often move at a breakneck speed, packed with action, featuring a limited number of characters, and skipping over the down time between conflicts. This is certainly no exception. So I was surprised at the amount of time The Universe Maker spends inside Cargill’s head: we get several page-long internal monologues in which he gradually figures out life, the universe, and everything. I’d call it cerebral if it weren’t also quite loony.
I mentioned that this is Scientology sci-fi. Van Vogt was a friend and follower of L. Ron Hubbard, and he even put his writing career on hold to run the California chapter of Dianetics. (He wasn’t a Scientologist, though, as he disapproved of the mysticism that accrued to Hubbard’s later teachings.) I’m no expert on Scientology, but I can see echoes of it here, in jargon like “prime thought” and plot elements such as the Shadows’ ability to train their brains so they can take on an incorporeal form that allows them to transit space-time, which reflects higher level Scientology teachings about control over matter, energy, space, and time. It’s a rabbit hole down which I’m sure I don’t want to go, but it explains Cargill’s musings about the workings of history, energy, the universe, and the immortal soul as material object, and his ability to transcend the known limitations of all of them. (At one point he concentrates on a particular musical note and is able to create vibrations that carry him through time.) It’s noted early on that Cargill is one of the few people whose futures the Shadows can’t read, presumably because he’s a quality individual who, with proper training, can write his own future. There’s also hints of scientology’s anti-psychiatry and anti-mainstream religion stances in the Tweeners’ belief that murdering Cargill will heal the psyche of a descendent of the woman he killed (or did he?), and near-constant references to religion being a barrier to the evolution of humanity.
I haven’t discussed whether The Universe Maker is good, or enjoyable, or worth reading, and the answer is sort of, yes, it depends. I certainly enjoyed the whiplash pace and the refreshing lack of padding. The noodling about energy and mind-power and whatnot was fascinating too, in a late-night-gabfest kind of way. I’d have accused van Vogt of being stoned out of his gourd when he wrote some of this (he even predicts vaping), but Scientology is anti-drug. Van Vogt’s writing is serviceable for the most part, but there are passages of great beauty, most of which occur during Cargill’s thinking-jags about the soul. The sexism typical of the era is distracting: every time Cargill manages to escape a hairy situation, it’s by seducing the attractive but not particularly bright young woman who is left as his only guard by appealing to her female need to be dominated. And in the end, nothing in the plot makes a lick of sense, which isn’t as much of a criticism as it may seem.