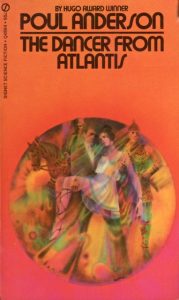 The Dancer from Atlantis (Poul Anderson, 1972)

Poul Anderson (1926-2001) was among the most lauded science fiction and fantasy writers, winning seven Hugo Awards and three Nebula Awards. I absolutely hated the other novel-length Anderson outing I read, Tau Zero, aka the longest story problem in history. I didn’t think he could write a believable human character, nor could he integrate his math problems with his narrative. I understand that it’s considered a classic of hard science fiction, and readers, you will not find much praise for hard sci-fi in this column. But my Spreadsheet of Destiny decreed that I read The Dancer from Atlantis, and so I did. And it’s pretty darned good! More on that in a minute.

Twentieth-century American architect Duncan Reid, medieval Russian rancher Oleg, fourth-century Hun raider Uldin, and fourth millennium BCE Atlantean bull-dancing priestess Erissa are swept along through time by a damaged time machine and deposited on the Mediterranean coast of Egypt a scant few months before a volcanic eruption is due to obliterate her homeland of Atlantis and destroy the Minoan stranglehold on Mediterranean trade. Erissa is a survivor of that eruption, and as a teenage priestess she loved a god named Duncan Reid, who fathered a child before disappearing in a puff of smoke. The four integrate themselves into Cretan society, interact with Theseus, introduce cavalry and other weapons and methods of war, and try to figure out how to get back home, while Duncan and Erissa try to figure out how to save her civilization from destruction.

There’s no math, which is good. There are also a couple of believable characters who have human interactions, something that was missing from Tau Zero. I’m especially surprised and satisfied by how Anderson handles Duncan Reid’s double romance of Erissa—both as the middle-aged mystic he encounters first, then the teenage version of her he encounters on Atlantis. It could have been creepy in any number of ways, but it wasn’t.

But the best thing about it is the copious amounts of research that Anderson obviously did—about people as diverse as medieval Russians and the fourth century Huns, but also about the intricately connected, overlapping, and contradictory mythology and archaeology of the ancient Mediterranean. Let me rephrase that, because lots of authors do a lot of research, and their books are terrible. Anderson synthesizes this research and integrates it smoothly into his narrative, using his imagination where necessary and keeping the page-length explanations to a minimum. This is something that, say, Umberto Eco, in his wretched The Name of the Rose, demonstrates that he doesn’t understand.

Anderson also shows a deft hand at describing large-scale destruction, as the chapters that take place in the aftermath of the volcanic eruption are harrowing and economical. He can sketch in a few sentences a kind of detailed chaos that lesser (or perhaps more sadistic) writers would dwell on. Honestly, he shows a deft hand at all of the things that he seemed incapable of in Tau Zero, so I think I’ve suddenly become a fan.