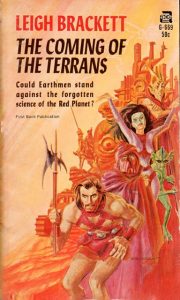 The Coming of the Terrans (Leigh Brackett, 1967)

Leigh Brackett (1915-1978) was an American writer who balanced careers as a pioneering female science fiction writer (she was the first woman shortlisted for a Hugo), a crime novelist, and an in-demand screenwriter. It’s the latter that most readers are familiar with: she co-wrote The Big Sleep (1945), Rio Bravo (1959), and probably most famously, The Empire Strikes Back (1980). But she wrote dozens of short stories and a handful of novels, and as Hugo-winning novelist Kristine Kathryn Rusch said, “There’s a reason everyone who has read her work remembers Leigh Brackett.” The woman could write.
The book is a collection of five of Brackett’s space opera stories about Mars, which were originally published between 1948 and 1964. They bridge what Wikipedia tells me are two eras of her career, an earlier high adventure phase and a later, meditative phase, where her Mars stories became lamentations about the passing of cultures.

Obviously this isn’t the real Mars: we knew by this time that there were no canals on the red planet, and two years before this collection was published, the Mariner 4 put to rest any question about whether there were human that thrived long before the ancestors of Earthlings decided to climb down out of the trees. But if you’re willing to let the fact that there aren’t really advanced, dying Martian civilizations put you off reading this book, you’re in the wrong genre, pal, and I have doubts about your imagination. As Brackett says poetically in her foreword, “I offer these legends of Old Mars as true tales, inviting all dreary realities to keep a respectful distance.”

Purposely devoid of what she calls “ruinous fact,” her vision of Mars is what might happen if J.G. Ballard had decided to write an Edgar Rice Burroughs tribute, or if William S. Burroughs’s Interzone were situated in a dying civilization on Mars instead of in Tangier. It’s bleak, it’s dangerous, it’s weird as hell, and it’s scary. There are notes of H.P. Lovecraft as well, specifically of his short novel In the Mountains of Madness, but generally in the idea of dead civilizations holding secrets that should really stay secret. In “The Last Days of Shandakor,” which recounts an Earthling’s attempts to disregard all good sense and venture alone into a city of death inhabited only by ghosts, Brackett summons a real dread that manages to grow when we discover the city isn’t uninhabited after all. And another Earthling’s quest to retrieve the records of a vampire-like civilization in “The Road to Sinharat” had me looking over my shoulder. (I’m using “Earthlings” because Brackett’s Martians are also humans… most of them anyway.)
It’s really great stuff, with one big caveat. The Rusch quote I mentioned above comes from a blog post in which she explains why she decided against using one of the stories in this collection in an anthology: it’s what the undergrads would call problematic. Specifically, there’s a whole lot of colonialist bullshit involved. Brackett’s Mars is clearly based on European visions of North Africa and the Middle East, its cities dens of forbidden pleasures and illicit drugs, its inhabitants living by outdated codes but somewhat lazy and shifty, sitting around waiting for their world to end while distracting themselves with drugs, sex, and arcane rituals. The “traditional garb” for Martian women seems to be mid-1950s Hollywood’s idea of a harem outfit, minus the bikini top. Many of the protagonists in the stories are Earthlings who have “gone native” (forgive the terminology, but it’s what I suspect Brackett would have called it), who have lived among the Martians for so long that they manage to out-Martian the Martians–imagine if T.E. Lawrence (aka Lawrence of Arabia) had been an emissary to Mars instead of to the Middle East.
I don’t think I’m reading too much into this, either, as Brackett is pretty clear about the references too: Barrakesh (Marrakesh) is a major city, and there’s a Jekkara too, which I suppose is a Martian Djakarta, another city associated in the Western mind with decadence; the people from the land of Shun are called Shunni. One civilization was “old before the Reed Kings and the Bee Kings were little boys along the Nile-bank,” a reference to traditional symbols of Upper and Middle Egypt. Your enjoyment of this collection will depend on how much this kind of thing bothers you, or how much you notice. Certainly some of the writers regarded as giants of Western literature waded or dived into the same pool. There are hints that Brackett rejected some of the more unsavory assumptions, and some Earthling characters discover that their racist viewpoints are incorrect, but it doesn’t erase the issue.
I’m perhaps overemphasizing this drawback so readers know what to expect. What they should also expect is some damn fine writing. The stories here range from the merely good (“The Beast-Jewel of Mars”) to the great (“Mars Minus Bisha”) to the truly timeless (“The Road to Sinharat”). She summons achingly beautiful and lonely visions of the doomed struggle of humans against hostile environments: striated ruins of great cities chasing retreating shorelines down to dead sea bottoms; ghost cities made of coral whose abandoned walls keen in the dry desert wind. Brackett describes the Mars of the imagination as “the Ultima Thule, the golden Hesperides, the ever-beckoning land of compelling fascination,” and the stories here bring the barren, dying (but not quite dead), imagined world of generations of stargazers and dreamers to lyrical life, ruinous fact be damned.