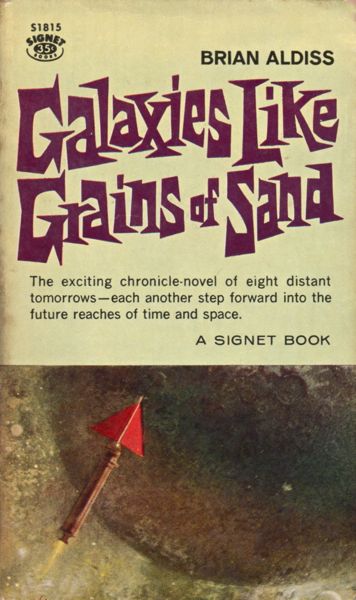 Brian Aldiss (1925-2017) wrote more than twenty novels, a dozen nonfiction books (including the brilliant “Billion Year Spree”), and more than 300 short stories. He won two Hugo Awards and three Nebula Awards, but he’s probably best known now as the author of “Supertoys Last All Summer Long,” the basis for the Steven Spielberg film A.I. Artificial Intelligence. He was associated with the British New Wave of science fiction (not to be confused with the British New Wave of heavy metal), a loose collection of writers who wrote self-consciously literary sci-fi in the 1960s and 1970s.

This is a fixup–a reworking of previously unrelated stories to create a new novel. Fixups can be wholesale rewritings of material to create a seamless new work, or, as in this case, they might just contain new connecting material that explains why the stories have been Frankensteined together. The form exists outside science fiction–Sherwood Anderson’s Winesburg, Ohio and John Steinbeck’s The Red Pony meet the definition–but it is most common in this genre. I’m guessing that publishers saw it as a way to make more money by recycling stories they already owned. Authors, too, might have seen the form as a way of remedying the damage that cut-happy magazine editors inflicted on their stories.
The cover blurb explains that this is a “chronicle-novel,” and the conceit is that it checks in on humanity periodically in the eons after a nuclear war destroys civilization, observing how, when faced with extinction, people learn (or fail to learn) how to make a better world. Unfortunately, much of the collection resists Aldiss’s attempts to tie everything together, suggesting that maybe he shouldn’t have bothered. I found that I enjoyed it a lot more when I pretended that it was just a short story collection.
The stories in the first half are almost uniformly good. “Out of Reach,” which begins as the bombs are falling, is a poignant story of our species-wide failure to learn lessons; its message that nationalist hatred stands in the way of human progress speaks strongly even today. “All the World’s Tears” is a borderline hilarious nose-thumbing at racists, presenting a future where white people have been exterminated and the birth of a melanin-deficient child is enough to upset a family’s social standing; I imagine that Aldiss wrote it in response to British lamentations that the sun was setting on their former empire every few months. “Who Can Replace a Man?” is a sly satire of bureaucratic groupthink crossed with Asimov’s laws of robotics and a laugh-out-loud ending. Not everything in the first half is good, though: the worst story in the collection, “Secret of a Mighty City,” is a real slog, a sort of reworking of Preston Sturges’s “Sullivan’s Travels” that misses its inspiration’s point.
The stories in the second half begin to fit together into the promised “chronicle-novel” documenting humanity’s slow spread across the galaxy, but they’re uniformly weaker. “O Ishrail” concerns Earth’s refusal to believe a shipwrecked prophet who bears tidings of universal harmony, but “Incentive” seems to forget that story’s moral and takes an isolationist stance that seems to also contradict the lessons from the earlier stories. “Gene-Hive” reads like a simplistic supervillain origin story, and “Visiting Amoeba” ret-cons the universe to finally explain why the connecting material is written the way it is.
The ideas get bigger as the collection draws on. I was especially enamored of his concepts of an advanced language that enables interstellar travel and of a galaxy-wide fake war, somewhat resembling codes of chivalry, that takes the place of real war as humanity matures. However, Aldiss seems to grow impatient with the mundane work of writing a good story to carry the ideas. I wouldn’t exactly recommend skipping the connecting material, but I do endorse skimming it if you come across this collection.