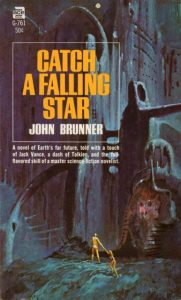 John Brunner (1934-1995) was a British science fiction writer who is best known for his Hugo Award winning 1968 novel Stand on Zanzibar, which is by all accounts a trippy and often exhausting exercise in experimental sci-fi. I haven’t read it yet. I own more novels by Brunner than by any other author, a product of his name being near the beginning of the alphabet and me exhausting my funds by the time I get to him. But his work is also usually very interesting, even when he gives the distinct impression of phoning it in.
He’s not exactly phoning it in here in Catch a Falling Star (1968), which was previously published as a short story and then as a novella before Brunner expanded it for this edition, but he’s using someone else’s phone. The back cover blurb cites Jack Vance and J.R.R. Tolkien as the primary influences, and that sounds about right: if Vance’s dying earth stories and Tolkien’s perilous journeys got busy and had a baby, it might look like this book. The problem is, that’s not an endorsement.
The story is that 100,000 years in the future, an amateur astronomer named Creohan discovers that a rogue star is going to sweep through the solar system in 200 years, destroying the earth. He sets off like a crazed Diogenes, accosting people in the street and trying to find someone, anyone who will believe him. But nobody cares because mankind has lost its will to live, and many of his fellow citizens have become Historickers, addicted to exhaustive examinations of previous civilizations visible to them through a kind of magical tree. Undeterred, he leaves the city in search of someone who can help him save humanity, along the way picking up a ragtag fellowship (sorry, I couldn’t resist) and encountering the most astounding series of deus ex machina contrivances that I’ve encountered in the past seven months. At least.

Part of the problem with the book is the language Brunner uses. It’s stilted, expository, stentorian, as if every sentence was designed to be recited by a guy in a wig with a sword strapped to his waist. I suppose the idea is that civilization has devolved to the point where we’re in a mythic age where people don’t have conversations; instead, they recite exposition at the top of their lungs. And interpersonal communication is so degraded an art that everyone sounds exactly the same, whether they’re from a futuristic city with living houses or a tribe full of unclothed savages miles from any civilization who raise human-like creatures for slaughter. Or maybe Brunner was just lazy and stuck with a particular mode of declamation.

I am tempted to blame the requirements of the sort of mainstream pulp sci-fi that Brunner was writing for, but (1) I think that’s a bunch of shit, as there was great art being produced in 40 cent paperbacks, and (2) Brunner produced a lot of that great art. He’s usually effortlessly good, sometimes brilliant, capable of tossing off a ridiculous plot, selling it, and making it seem stealthy, as if he had lured you into thinking he wasn’t working very hard when in fact the wheels were always turning. The blissfully fun and intelligent A Planet of Your Own (1966) is a perfect example: it’s the story of a woman who uses her bottomless knowledge of interplanetary law to defeat an egregious contract, and it’s written in a breezy, fun style that is nowhere in evidence here.

This was a long, tough slog (and yet it’s only 158 pages), and I can recommend it only to readers who find dialogue like “the present is enough for me; to the past and future I feel indifferent” unproblematic in its obviousness. That’s it, at heart: it’s obvious, and Brunner works best when he’s not obvious. Leave that to someone else.